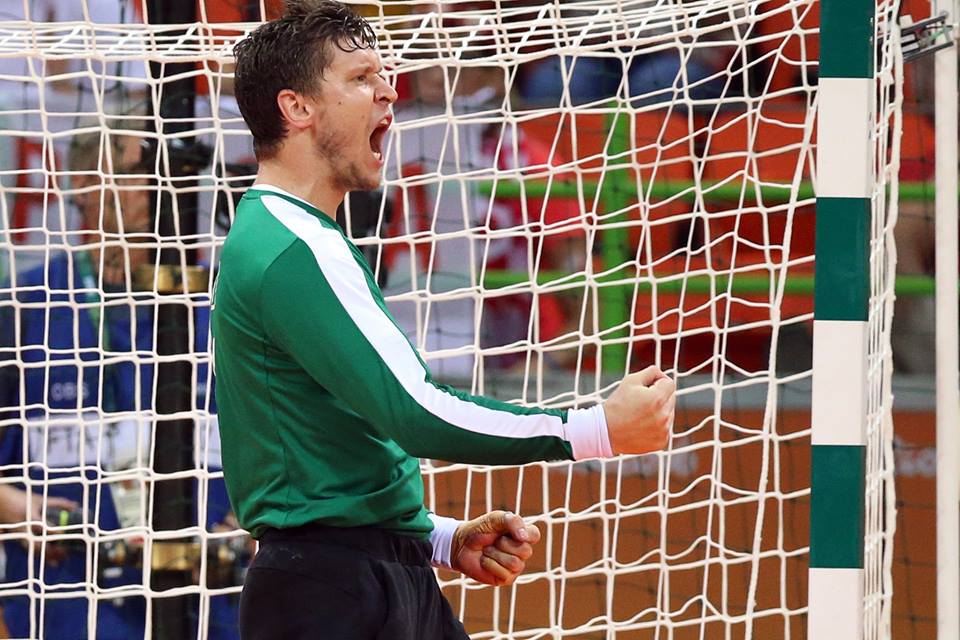 After a tough match between two Scandinavian giants, Denmark had the edge and eventually took the two points and the ticket for the semifinal of the World Championship in Hamburg.

Kim Ekdahl Du Rietz tried to explain his perception of what happened on the Jyske Bank Boxen last night. “I think throughout large parts of the game we played our best game so far in the tournament today and then we had two or three periods in which we missed too many shots and made too many errors and that cost us the match, but to me…I have a hard time being really disappointed because today we gave our best and Denmark was better”.

HP: Both you and Denmark didn’t have a great effectivity today, but do you think in the end that made the difference?

Du Rietz: “I don’t know. I wouldn’t draw any conclusions out of the sheets, but we had a few down periods at the beginning and in the middle of the second half, with scores 4-0, and then we were trailing, and that margin is too hard to catch in the end”.

HP: How hard will it be now to get up for the last match?

Du Rietz: “I don’t know if anyone feels like getting up for, there’s a last game but we just want this to be over as quickly as possible”.

Author of 4 goals, and the one that held the key to unlock some of the tightest moments of the match, Rasmus Lauge reflected on the tough match against their neighbors and the pass to the semifinals.

HP: You’ve obtained your first goal which was reaching this stage, what are the feelings in this moment?

Rasmus Lauge: “Yes, one of our goals was the semifinals, of course. So, we’re very satisfied, but now we have set new standards and we want to reach the final and play the “funniest game” of them all here in Boxen”.

HP: It was a tight match and Sweden were leading at one point, what do you think was the key to turn it around?

Lauge: “I think we actually played very good at the beginning of the match, but we didn’t convert all of our chances. (Andreas) Palicka played very good on the goal for Sweden and we hit the crossbar several times, so luckily we didn’t have to change the way we play, we just had to keep moving forward and take better care of our chances, and after the 20th or 25th minute we started to convert all of them and we won the last 35 or 40 minutes with 5 goals, so we’re actually very satisfied with that”.

HP: You will probably miss this audience on the semifinals in Hamburg…

Lauge: “Well, it helped us every time we played here. These first 8 games have been amazing, the audience has…I don’t know what to say…that’s not normally the Danish way, but I like it! How they cheer all game long, so we want to play the “funny game” on Sunday to get the same experience”.

HP: There’s a new hashtag going on, the #10yearchallenge, if I take you back 10 years, did you picture yourself in the semifinal of a World Championship?

Lauge: (smiles) “No, I probably didn’t. But I was playing in the youth national team and of course I had dreams to reach this stage at some point, so I’m just happy to be here and I’m just enjoying every moment of it”.

HP: How does the body feel at this point after having played 8 matches?

Lauge: “The body is on top of everything now, we’re not that tired, we have a lot in us at the moment and know that we have to find some of the reserves as all of the other teams will have to”.

Best player of the match, team captain for Denmark, Niklas Landin, also talked about his feelings after the qualification among the best 4 teams of the tournament.

HP: You’ve reached the semifinals now, how does this feel?

Niklas Landin: “Yes, this was our first goal in this tournament and it’s an amazing feeling right now. It was a big, big match against our neighbors so it was a really strange feeling going into the game tonight”.

HP: What do you think made the difference for you tonight in such a tight game?

Landin: “We had some problems with (Andreas) Palicka, and I think we got the key on the second half when we scored some important goals, but I think it was really important for us that in the 60 minutes we ran forward”.

HP: How much will you miss this audience in Hamburg?

Landin: (smiles) “Well, I hope that we’re going to have many German people cheering for us, but I don’t know, it’s going to be so much different in Hamburg!”

HP: Ten years ago you were playing the junior World Championship in Egypt, did you imagine you’d be here a decade after?

Landin: “I don’t know…(thinking) I didn’t have so many dreams when I was playing in Egypt at that time, but I had a little hope that I could play in the national team reach some big matches like this”.