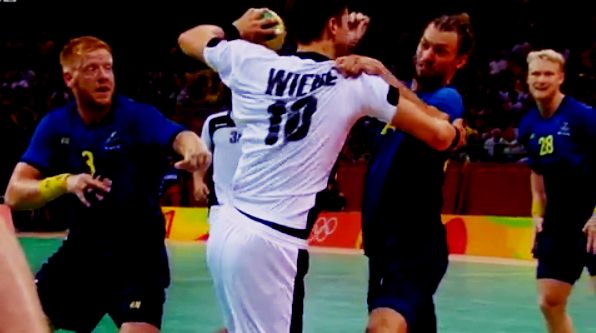 Germany celebrating the first handball win in Rio! The squad of Dagur Sigurdsson outplayed great Swedish team 32:29 (18:15) in match which represent handball in the most positive way.  The silver medalist from the last Olympic tournament in London, Scandinavians were in the match until the end, but 4:1 series 52nd to 55th minute was decisive today at Future Arena (25:25 – 29:26).

The German right wing Tobbias Reichmann netted last three of six goals of his team to secure the first points which will give another boost of energy to the European champions from Krakow 2016.

Despite Germans had control over the result during almost 60 minutes, Olsson’s boys were very close. Germany had 23:19 in 43rd minute, but that was a just a beginning of interesting finish.

The Man of the Match was Julius Kuhn, who had shooting afternoon with seven goals, followed by Uwe Gensheimer (5) and Tobbias Reichmann (6). The Scandi left wing Jerry Tollbring was very good from 7-meter line (6/6 – 7 in total), while Johan Jakobsson netted five goals for yellow jersey team.