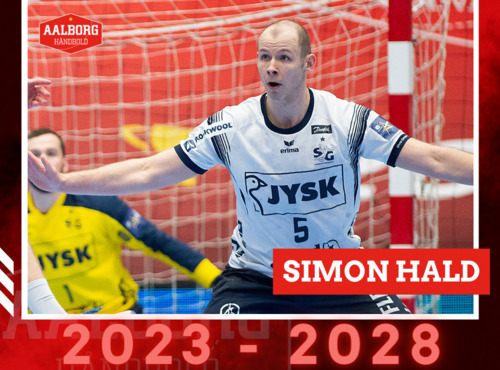 The 27-year-old national team player, Simon Hald, returns home to Aalborg Handball on a 5-year contract, which thus applies until 2028.

The strong line player, who has had his handball upbringing in the vicinity of Aalborg, made his senior debut in Aalborg Handball. Here he managed to play more than 200 matches until 2018, when he switched to German SG Flensburg-Handewitt, which he has turned out for ever since.

Here he has built further on his game and made the big breakthrough on the national team, where he helped win the World Cup in both 2019 and 2021. He has so far represented Denmark in 59 international matches.

The 203 cm high string player has i.a. helped win the German championship with SG Flensburg-Handewitt in 2019 and participated in the EHF Champions League all four seasons, and now he returns to his hometown from the summer of 2023.

“Simon moved to Flensburg almost four years ago to try abroad. Since then, he has simply continued his hard work and developed into an international top player in both defense and attack, and I am proud that we have already succeeded in bringing Simon home to Aalborg despite his young age, “says director , Jan Larsen.

“I look forward to coming home to Aalborg and again running on the field in front of the loyal home crowd in Sparekassen Danmark Arena. Aalborg Handball means a lot to me, and of course I have followed the club since my change. I am impressed with what they have achieved in recent seasons, and I look forward to being a part of it, ”says Simon Hald.

Simon and SG Flensburg-Handewitt are just like us ready for the quarterfinals of the EHF Champions League, after they outscored Hungarian Pick Szeged in the 1/8 finals. FC Barcelona is waiting here.