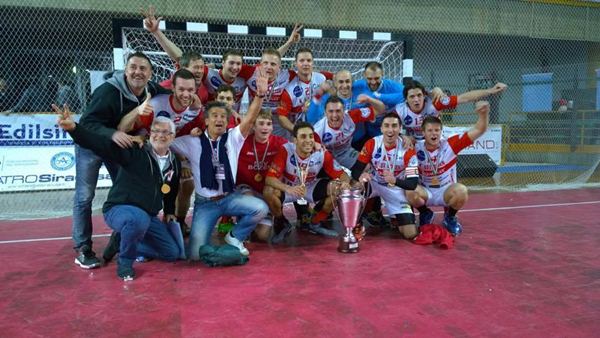 During the weekend from 27th of February from 1st of March, Italian National Handball Federation assigned its second season title after the Supercup of August: the national Cup, Coppa Italia. Without preliminary rounds, the national Cup saw the top 8 teams of italian first league Serie A facing in an exciting Final Eight, held by the city of Siracusa, on the Sicily island on southern Italy.

On Friday, the 8 teams played the quarterfinal matches: easy win for Terraquilia Carpi and SSV Bozen, that reached semifinals thank to the great matches against HC Fondi (34-21) and Pallamano Ambra (43-29). Not the same for the last two quarterfinal matches: the centre-italian team of Romagna Handball won just with a last-minute goal against the home team of Albatro Siracusa (23-21) but the best match of the whole day was the last one. The national cup and league champions of Junior Fasano were facing Pallamano Pressano, last year semifinalist: no one could believe that Pressano team played a historic match and, after the penalty shots, won 23-25, calling off the favourite champions.

On Saturday, SSV Bozen showed all its power winning by 25-22 against Terraquilia Carpi, earning the pass for the final match. On the other semifinal, Pallamano Pressano team of Branko Dumnic did not stop dreaming: Romagna Handball had to resign on the 60th minute and the score, 27-28, gave Pressano the ticket for the first national cup final match of the club history.

The final match, on Sunday, saw the two northern teams facing on the top south spot of Italy: with the Minister of Labour Giuliano Poletti and the Italian Olimpic Committee President Giovanni Malagò on the hall tribune, SSV Bozen did not have many concerns to win the match with a demonstration of power and great handball, closing with a clear win, 25-19 (first half 11-7). Smiles on the faces of SSV Bozen players for winning the first season title (the third national cup of club history) but also runner-up team Pressano was happy and excited for reaching the final match in an unbelievable way, the first national cup final match of club history.

After the big Final Eight weekend, now the italian first league is back on the court: after the Regular Season, the italian teams are now playing for the second phase; another group stage that will last until the end of April, showing the 4 teams that will fight for semifinals of the italian league title.