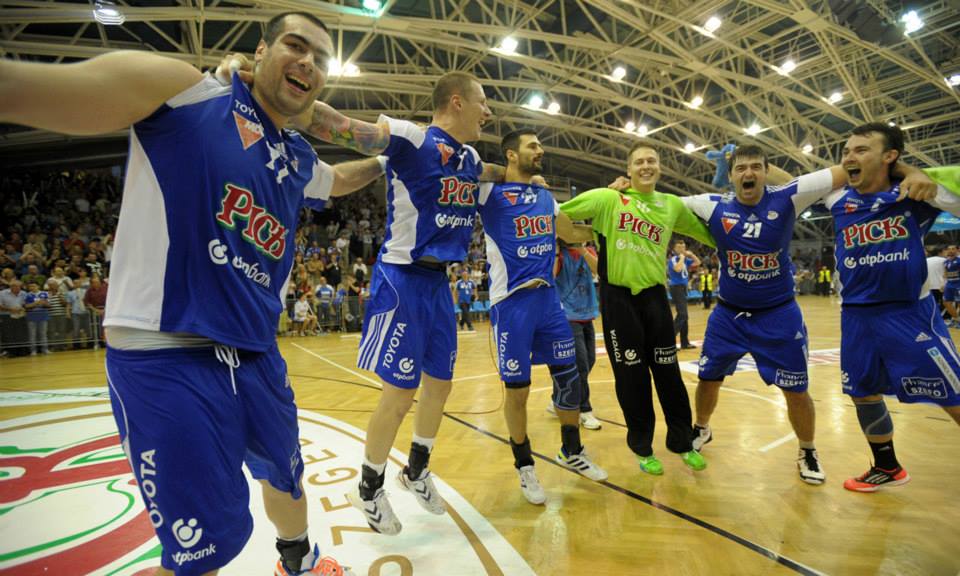 The long awaited big battle between Pick Szeged and Veszprém took place on Saturday afternoon. Incredible atmosphere and a completely full sports hall awaited the players. Before the start of the match a small ceremony remembering Pick’s Hungarian Cup and League gold medals in the past took place. Members of the local folk dance group also demonstrated their abilities with great success.

The Hungarian ‘el clasico’ started with Veszprém’s goals, but the score was soon equalized thanks to Ilyés. Veszprém dominated the match, goals by Ilic resulted in a two-goal lead by the middle of the first half (6-8). What came afterwards will surely haunt Veszprém for a long long time. In 12 minutes Pick produced a highly demoralizing 8-0 run against the team who are one of the top contenders to win the CL title. Mindegia provided fantastic assists, Ancsin scored from 9 meters into Alilovic’s goal, Larholm scored from penalty, Vadkerti from left wing. Szeged’s goalkeeper Mikler stopped every attempt whatsoever and Pick went to the dressing room with a very comfortable lead (14-8) cheered by their highly enthusisatic fans.

The half-time break did good to Veszprém, they quickly reorganized their game and scored three times. Laszlo Nagy was successfully neutralized by Szeged’s wall but Ilic kept on scoring. Szeged also changed gear afterwards and Mindegia scored important goals. His incredible passes to his fellow players were honoured by roars of applause from the spectators. Ancsin also scored and the difference grew back to five goals by the 40th minute (18-13). Coach Ortega took his time out and Veszprém utilized their reserve power for the end of the match. Szeged’s first-line team became more and more tired, missed passes in attack were intercepted by Veszprém, and their fastbreak goals brought the score to a draw (51st minute 20-20).

The final 9 minutes were to decide the fate of the match. The only question left was whether Szeged could ressurect and win the match or would Veszprém be able to keep the pace and get the two points. The guests lead their attack but Parrondo grabbed the ball and scored from fastbreak so Pick were in front again! Ancsin also scored, this time from a twisted body position  (22-20). Ilic cooled down the frantic public (22-21), but Szeged had the last laugh: after a superb pass from Mindegia Vranjes scored with his back facing Fazekas’ goal! (23-21) In the very last minute Ilic scored again (23-22), Szeged failed in their attack and 20 seconds before the end of the match Ortega took his time out again. Veszprém’s attack was blocked and Nagy couldn’t score from the overtime free throw so Pick won the match after an incredible 60 minutes!

The main pillars of Szeged’s victory were great defending, wonderful play by Mindegia and great goals from Ancsin. Coach Pastor’s work seems to take effect. Ilic was the only player worth mentioning from Veszprém so the battle between the two spanish trainers ended with Pastor’s well-deserved victory.