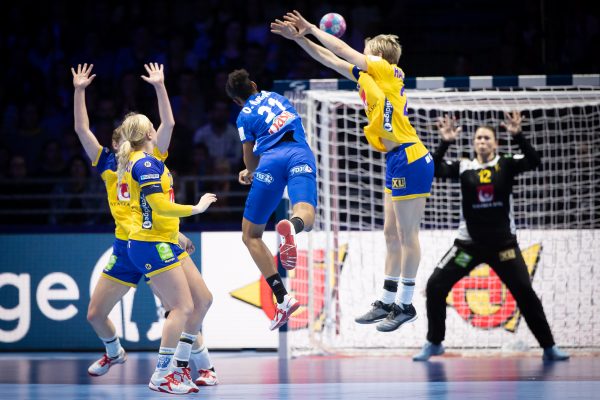 The conducted by Henrik Signell could not hold on to the advantage they had throughout the match and now see themselves on a more difficult road to Paris after the draw 21-21 against France. The hosts are now second, one point behind Russia (6).

Sweden started off better on the second match of the main round against the hosts. After a 3-0 start with goals from Olivia Mellegard, Hanna Blomstrand and Isabelle Gulldén, it took France 5 minutes to score for the first time, through Laura Flippes. However, they managed to get closer and at nearly 10 minutes they had already shortened the gap to 1 (5-4). At 22 minutes the XXL Hall roared with Pauline Coatanea’s goal, which marked the draw in 9, and the first time France caught up since 0-0, after being under by 2 since the beginning.

After a timeout called by Henrik Signell at 24 minutes, the team found their shape again and built a new advantage that they would carry until the end of the first 30 minutes. Gulldén, who completed her 200th match with the national team, scored 4 goals on the first half and helped her team, not only with goals, but also with some of her trademark assists, the last being a ‘no look pass’ to Linn Blohm, who put the final 14-11 of the first half. Sweden were displaying a better game than that of the opening match of the main round against Montenegro, and were leading with authortity.

Jamina Roberts scored the first goal of the first half to put Sweden 4 goals ahead, the maximum difference in the match (15-11). Laura Glauser jumped on court for the entire second half and she would become an important factor for France in the hot moments of the match. Beatrice Edwige’s goal for 18-16 at 39 minutes, would be the last for the following 10 minutes as the match remained with that score until the 50th minute. Hanna Blomstrand would stretch the goal difference to 3 (19-16) at the 50th. Those goalless 10 minutes were a display of tough defenses, but mostly, of goalkeeping skills by both Filippa Idehn and Glauser. The Swedish goalkeeper, who plays for Brest Bretagne, saved three consecutive fast breaks to keep her team in the lead.

The next minutes would see France, supported by an amazing crowd in the XXL Hall, reach the draw at 55’, thanks to a goal from Alexandra Lacrabere. The audience stood up for the rest of the match and played their role on the dying minutes, cheering after every French save and screaming at every goal. With 4 minutes left, Blohm scored for 21-20 after another ‘no look pass’ from Gulldén and on the following attack, Orlane Kanor scored her 4th goal to tie the match for the last time. On the last two minutes, things went as follows: lost ball by Gulldén, shot out of range from Kanor, technical foul by Sweden, last attack for France, saved by Idehn right before the final buzzer. A ‘happy’ draw for France and a painful one for Sweden, who were leading nearly the entire match and still had hopes for the semifinal berth.

Filippa Idehn was chosen best player of the match, she finished with a 41% save rate (14/34). The top scorer of the match was Gulldén with 6 goals; on the French side Alexandra Lacrabere was top scorer with 5.

While frustration could be perceived in her face, Gulldén showed a stint of satisfaction over the work well done on today’s match, particularly compared with the one against Montenegro: “I think we played a really good game today. We were in front the whole game, so of course I’m dissappointed by the draw because I feel that we had it, but still, we did so much better than we did before. I’m not dissappointed over the game today, but over what we did before. We had time to prepare it a little bit more and we had more freshness in the body after two days, and it was all or nothing for us, and this is also what makes us feels a little bit sad, because now we have a really, really small chance to reach the seminfinals but if we had won, it would’ve been better.”

Looking back on what she thinks failed in the end, she stated: “In the last 8 minutes they were more aggresive and they sort of locked us down, and I think before that what we did good is that we kept the ball going a lot, even if it was not a good chance, we always looked for the next player; and maybe in the end of the second half we were a little bit more stressed to do it.”

On the other hand, Olivier Krumbholz did not hide his happiness in press conference: “This game was really exciting, it was really tough and complicated for us, we succeded in the end and we are so happy to come to a draw as Sweden had the lead throughout the entire game, so the first feeling is happiness, it was such a tough game.”

Allison Pineau was also ‘relieved’ with the point scratched today: “I think today they were closer than ever to beat us, it was a really tough to find the key today, I think tactically they were very good. We had many different chances to score, so congrats to Filippa who plays in the same club as me, because I think she’s the one who made a big difference, because when they were leading we were so close to come back and she made very important saves. They were much better today than against Montenegro, we had problems in defense to solve some things. I’m really happy that we succeeded to get one point because we still have destiny in our hands to reach the semifinals, so we’ll see what happens”.