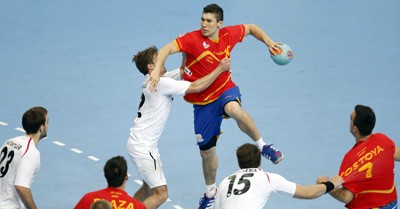 Alex Dujshebaev is yet to play his first game for the Spanish national team. He has a very bad luck so far. The past European Championship qualifiers that were on the schedule just few days ago was the third call for Alex Dujshebaev, which he had to cancel due to injury.

The first call by Manolo Cadenas for Alex was the qualification games for the past European Championship in Denmark against Portugal and Switzerland, but the winger had his ankle sprained and to cancel his debut. Then came the European Championship call, but in a friendly game against Brazil just prior he fractured his right hand, and another opportunity for official debut was unluckily lost. Now he was called again for the qualification games against Austria and Finland, and yet another injury prevented him from taking part.

Now the hope remains that he will be finally fit for the World Championship in 2015 in Qatar, where Spain is to defend the title from 2013.