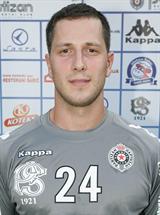 One of the best players of Serbian Super liga, RK Partizan’s captain, Uros Mitrovic (29) goes back to the West, this time to Swiss BSV Bern Muri. Experienced playmaker was already played in Spain (Octavio Pilotes) and France (US Creteil). After series of injuries he decided for the “new beginning” in his first team, RK Partizan Beograd and that was a good decision. He was the best player of the team during VELUX EHF Champions League matches and win two trophies with “white-black” from the Serbian capital – Super Cup and Serbian Cup.

Mitrovic was a member of Serbian “Eagles” squad at World Championship 2013 in Spain.