Valero Rivera satisfied: Together with the fans for the GOLD! | Handball Planet 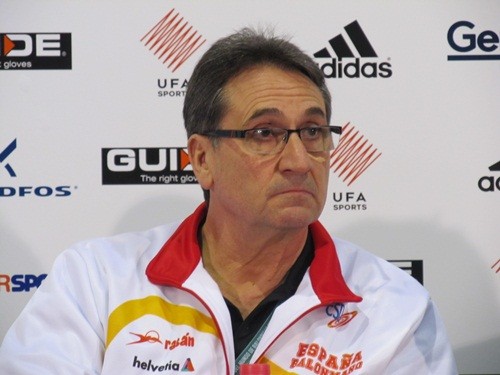 Spain will face Denmark in the WCh 2013 Final on Sunday in Barcelona. Spanish NT coach Valero Rivera was highly satisfied with result of his team:

Valero Rivera, coach Spain: I am very satisfied with the result and the way we played. But I have to give a big compliment for the Slovenians, because they play in a beautiful way and showed a strong tactical performance. We had problems in defence, when we were ahead by four goals in the first half, then Slovenia returned and nearly leveled the match. In the second half we improved our defence and goalkeeping. The first 20 to 25 minutes in the second half were decisive. Big thanks to the audience, which supported us in the same way as in Madrid and Zaragoza before. We hope that together with them we can become World Champion on Sunday. I try to separate the time the players are on the field and try to rotate as much as to avoid tiredness of them. I have no preference for the final in respect for the loser of the other semi-final. We are ready for the final.

– I am really happy to be in the final, as I was really afraid of the young Slovenian team, who plays the most beautiful handball in this tournament.  They have no big names in the team, but showed their strength when they came really close before the break.  In the end the defence and the counter-attacks were the keys – like in every match in modern handball.

– The match was more exciting and close than the final result reflects. We had to break a hard resistance. Slovenia was strong in defence and in counter-attacks. In the second half we managed to forge ahead clearer. I have no favourite to face in the final, because Denmark and Croatia are both strong teams.

– It was a deserved Spanish victory in a game not beautiful for spectators, but highly interesting from the tactical point of view. The saves of the Spanish goalkeeper made the difference and were the key, as in attack no team was superior.

– It was a hard match, in which we started well, but when Spain was away by six or seven goals we had no chance to equalize. Now we hope for our next chance to win a medal.