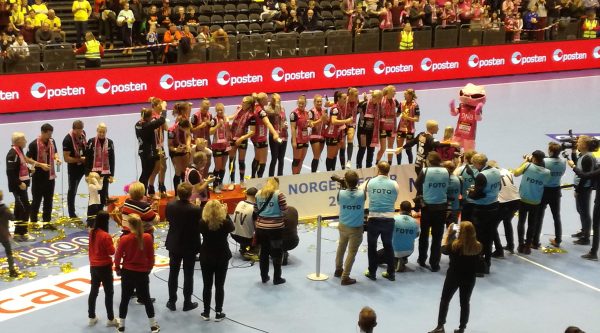 The first half was as tight as it can get. Storhamar Handball Elite was the one taking the lead, but Vipers would come back every time. After 13 minutes, Heidi Løke set a two-goal difference for the first time in the match (4-6), through a 7-meter shot. In the next few minutes, the coached by Ole Gustav Gjeskstad found their pace and were able to tie the match and eventually take the lead (9-8).

When Malene Aambark set the equalizer (9-9) at 20:25, Gjekstad called Vipers’ first timeout of the match and instructions seemed to sink in the dressed in pink. Important saves by Katrine Lunde allowed the dressed in pink to run some fastbreaks and, which helped them reach the half time buzzer with a +5 lead as Storhamar were unable to score on the last 20 minutes of the period 14-9.

Storhamar were able to shorten the gap at the beginning of the second period, with goals by Elise Skinnehaugen and Betina Riegelhuth, they were only one goal behind after 8 minutes (17-16). But when they seemed to be getting closer to step up and tie the match, they had a few turnovers that allowed Vipers to establish a new difference. After 20 minutes, the team from Kristiansand were leading 27-19.

Despite the fact that time was running out to try an epic comeback, Storhamar did not give up on their hopes. Coach Arne Senstad settleed a 3-3 defense that was able to steal some balls and with three minutes left to be played, they saw themselves 28-25. While there was still time to go for the win, a few mistakes in attack prevented them from getting any closer and in the end the match was 31-25 for Vipers.

One of Storharmar’s most experienced players, Heidi Løke, was definitely not happy, but stressed that she was proud of the team’s effort: “I had a very good feeling before the match. I knew that Vipers is a very strong team, they’re also playing very good in the Champions League, so we knew that it was going to be very hard but we had prepared very good and I think the first half was very good, not the end of the first half maybe, but in the beginning it was really good. And also on the second half, when we put the defense 4-2, we stressed their players a lot and it was very good that we never gave up; when they get a few goals, is good that we don’t let them get 10 goals, so I’m proud of the team”.

Løke believes that once they start playing the EHF Cup matches, the team will see an improvement:“The first match against them this season we didn’t play good at all, the got a lot of goals at the beginning and had the lead the whole match, and we never came back in the match. But today I think it was more exciting, also for the people in the hall and I think it’s good that we never gave up. But I think that when we get more international matches it will be good for the team because we didn’t have many of these matches so it will be good for us, we lost to a better team today”.

For Ole Gustav Gjekstad, despite the win, the team still has a few things to improve, but this title gives them confidence looking ahead: “First of all I’m very with the win. I think we have a lot of development to do regarding our game because it’s been a long time since the players have been together, so we just had a few trainings before this match, but I’m happy with the result. The defense on the first half was very good along with the goalkeeper, so then we had some fastbreaks, and that was important and it was the main key to win”.

Vipers Kristiansand is now looking forward to a promising participation on the main round of the EHF Champions League, and Gjekstad knows there’s room for improvement: “It’s a long way there, but I think we will improve during the next weeks, we will have more trainings together and we will get better than what we showed today and then I hope that we can reach the quarter finals in the EHFCL, and perhaps even longer, and for the Norwegian League…the goal is to win everything.