All four contestants from last year’s EHF Final 4 have qualified for the 2016-17 tournament and will fight for the European title in Budapest on the first weekend of May. Defending champions CSM Bucuresti, finalist Győri Audi ETO, bronze medallist HC Vardar and ŽRK Budućnost will all go back to the Papp László Budapest Sportaréna after today’s victories. 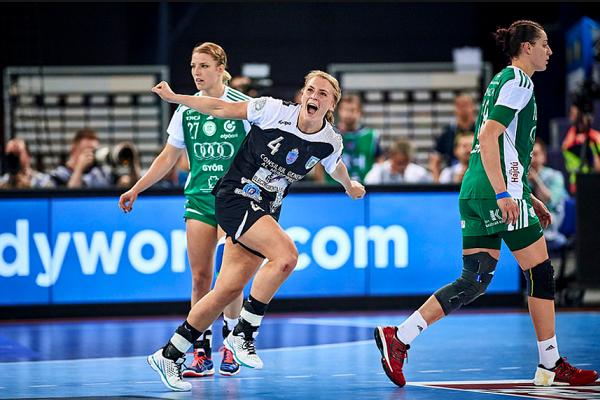 CSM looking to retain the title

The Romanian squad has booked a spot in the EHF Champions League semifinals after upsetting FTC in the return leg for 26-27. The first leg, that took place last week in Bucharest, saw the Romanian squad obtaining a 30-25 in the last few minutes after a very tight match. That goal dofference did not seem insurmountable for FTC considering the game showcased throughout the season and due to the home advantage for this last match, however, the current title holders managed to take a victory in a difficult court.

Things were tight on the first half on a match that started in 4th gear. After a fast paced six minutes, the scoreboard showed 3-3, but the team from the Romanian capital stretched the difference to 3-5 the next two minutes. If the gap did not get any bigger, it was mainly thanks to Blanka Biró’s performance under the posts. It took FTC 21’ to catch up and tie the match: Biró saved a penalty shot taken by Gulldén and Viktória Lukács scored for 11-11 through a fast break. The first 30’ finished with a one goal lead from the conducted by Gabor Elek, a missile from 9 meters, courtesy of Marija Jovanovic: 15-14.

On the second half both teams exchanged goals, but that was not exactly possitive for FTC who were still dealing with a 5 goal difference. The equality lasted until the end of the match and the coached by Per Johansson celebrated a 26-27 victory and a new ticket for Budapest that, unlike the last time, will not receive them as underdogs. FTC’s Marija Jovanovic and CSM’s Carmen Martin were top scorers with 6 and 5 goals respectively.

A two goal victory on the first match in Ikast did not sound satisfying for Vardar after having the lead of the match, at times, by seven goals. However, a win is always positive and today at Jane Sandanski Arena, the home team finished with a smile after defeating FC Midtjylland by, yes, two goals: 26-24. However, it was not a walk in the park for the Macedonian team that suffered the back court throws from left back Stine Jørgensen and the quick feet from a Danish team that threatened Vardar’s chances.

It was a highly intense match in which FCM showed no intentions to back down and took the scoreboard to unsuspected numbers. A very tight first half finished with a one goal lead for the visitors (11-12), who would extend the gap to three after the first few minutes of the second period (12-15). It was a difference that would’ve taken the Danes straight to Budapest, but the conducted by Irina Dibirova kept it cool and turned it around. They led the match until the dying minutes in which hopes were still high for Kristian Kristensen’s girls, but a few mistakes in attach and some lost balls gave the chance to Vardar to finish it of and celebrate a new trip to the Hungarian capital in May.

Vardar has booked their fourth participation in Budapest’s showdown weekend and this time they look forward to changing the story and finally making it to the final of Europe’s most coveted trophy. Stine Jørgensen (FCM) and Croatians Andrea Penezić and Andrea Cović were top scorers with 6 goals each. 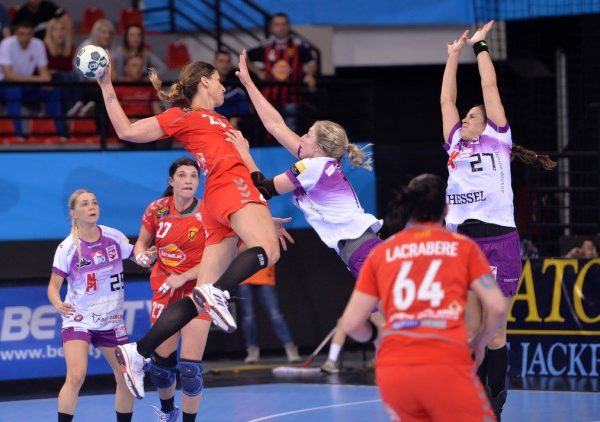 Home advantage is usually something that you can count on a home-away series, but having a 14 goal difference to revert is certainly not the best scenario. Larvik HK received ŽRK Buducnost in the Boligmappa Arena Larvik knowing that it was almost mission impossible to access the Final 4, but showed great temper and played to the best of their possibilities with a 12 player squad that still suffered the absences of Sandra Toft, Thea Mørk, Sanna Solberg, Amanda Kurtovic, Alina Wojtas and Vilde Johansen.

It was not too long until Buducnost took control of the match, it was 5-9 at 10’, but Larvik’s fighting spirit made sure this match did not become another catastrophe and by 21’ Karoline Dyhre Breivang tied the match in 14 goals and a minute later she turned the scoreboard on Larvik’s side to establish the 15-14. After what looked like an intense timeout talk from Dragan Adžić and assistant coach Bojana Popović, the visitors managed to change the story and go to the locker rooms with a 15-16 advantage.

On the second half three consecutive goals from top scorer of the match Cristina Neagu (9 in total) and another one from Katarina Bulatović set a five goal difference. It took 8 minutes for Larvik to score on the second half and they were only able to shorten the gap up to three goals, but the Montenegrin team did their part to take a 5 goal victory and seal their appearance in the Papp Laszlo Arena. Larvik’s top scorer was Linn-Kristin Riegelhuth Koren with 8 goals.

Győr chased the ghosts from Metz

After last week’s Győr loss against the French champions (32-31), the return game was set to be a tight clash for a place in the Tippmix EHF Final 4. The two time Champions League champions knew that in order to get the victory they would have to improve their defense, the same that had given them so many triumphs during the entire competiton had failed to succeed in the visit to Metz, but there was no room for mistakes at home in the Audi Aréna.

Brazilian left back Eduarda Amorim was fired up and lifted her team for a quick 6-3 after 13 minutes of the match; on the other end of the court, the defense was now more in control of last week’s biggest headache: Ana Gros. Nevertheless, a few saves from Laura Glauser and two consecutive goals by Marion Maubon took the match to 10-9 in almost 24 minutes of the first half. But a furious last five minutes from Győr gave them a much comfortable 17-12 lead at the end of the first 30 minutes.

On the second period the Hungarian powerhouse took full control of the match and after only 5 minutes of the complement extended the lead to 21-14. No-look-passes to from Nycke Groot to fellow Dutch Yvette Broch and over-the-head spin shots from Görbicz were only some of the things that were displayed on court. Meanwhile, Norwegian goalkeeper Kari Aalvik Grimsbo shut down the goal to help maintain the distance with the French side that were finding few spaces to change the story. A final 28-22 victory granted Győr the last spot for the Final 4. The coached by Ambros Martin will try to the final and bury last year’s painful loss in penalty shots against CSM Bucuresti. The top scorer of the match was ‘Duda’ Amorim (7), who spent the last minutes of the match on the bench with what looked like a pain on her left knee; followed by Yvette Broch by 6. On Emmanuel Mayonnade’s side, Ana Gros, Xenia Smits and Jurswailly Luciano finished with 4 goals each.

The semifinals draw will be held next Tuesday and will be broadcasted live on the EHF Champions League’s Facebook page.