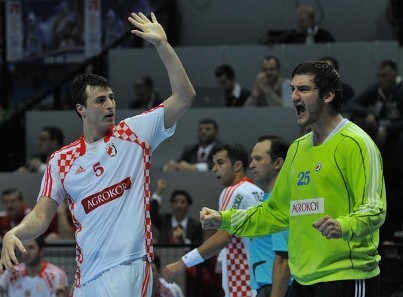 Croatia will play for their fourth bronze medal in a row. Opponent well known, last World Championship winner, but also quite often “customer”, Spain. Exactly two years ago at the European Championship in Belgrade, the “Furia Roja” fell to Croatia for the third place. Same as this time, Croatian players had a hard night then  because of the lost semi-final, managed to find strength and confidence, and win three bronzes in a row. Specialists for bronze, they have no intention of giving up, a medal is a medal:

– There won’t be tactical surprises. Most important is forget the semifinal, who goes into the third place match with calm mind. The harder it is, the more we know we need the bronze too. We know how important it is to finish the tournament with a victory – said Ivan Cupic and commented on his bad performances at the EURO 2014:

– This has been my worst tournament in my career. I don’t know why is it so, it’s hard and I feel bad because of it. But what happened, happened, and I need to bounce back from this, I can do much better – concluded Vive Kielce’s brilliant left-hander.

Mirko Alilovic also had a bad performance against Denmark. Landin took the victory. It’s not reason however, that a medal should not be put up around the neck:

– Life goes on. We go after the bronze, to be the first team in history with four bronze medals. We couldn’t get the semifinal out of our heads still. Even if we beat the Spanish, we’ll still be thinking about the match against Denmark and the missed opportunity. Spanish play technical – tactical handball, and play with the pivot a lot. We got used to playing against them. It will be one or two goals victory for one of the teams – is certain Croatia’s number 1.