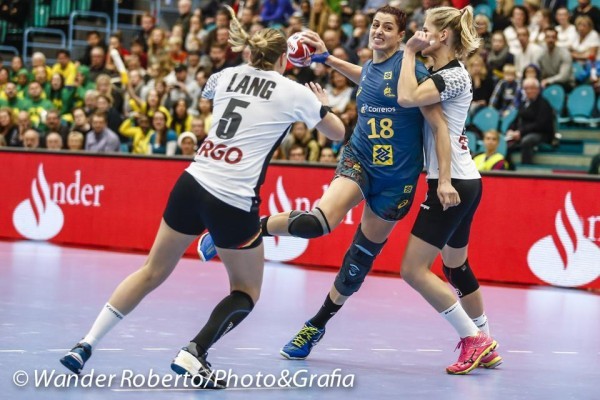 The conducted by Morten Soubak had a really tough fight against Germany last night, but they finally turned the table on their side in the last few minutes of the match. It was 24-21 for the current World champions that will very likely decide the top of the group on Friday against France.

A match as equal as it can be, from the beginning until the last five minutes. On the first half it was Brazil who trailed, always by one goal, until Eduarda Amorim put her team ahead for the first time on the 20th minute (7-6). Kim Naidzinavicius could have tied the score with a penalty on the last play of the half, but the ball hit the post and Brazil went to the locker rooms with a 9-8 in their favour. The highlight? Jessica Quintino´s flying spin shot.

The second half was exciting as the first one. Brazil couldn’t take off completely and would maintain a difference of one or two goals at times. Their defence was working fine, strong as ever, but their attack was not a fluent as what they’re used to. Jakob Vestergaard’s girls were resilient and with 10 minutes left on the clock they were only one goal behind, but what followed were an answered three goals from the South Americans to extend the difference to 23-19 in 28 minutes of the final half.

Mayssa Pessoa, who had replaced Barbara Arenhart in for the last ten minutes of the game had a superb performance and finished with a 57% of saves, all of them in crucial moments, when Germany was close to catching up. Anna Loerper and Alexandra Mazzucco scored to discount, but it was not enough and Fernanda Da Silva closed the match for a final 24-21.

The best player of the match, top scorer with 7 goals and current IHF Player of the Year, Eduarda Amorim was happy with the victory but not completely satisfied with the performance of her team: “I had a good performance, but what’s important is the victory. We had lots of technical mistakes and we missed some shots, I know our quality can be better. We can’t be satisfied, despite the victory. Our defence is our weapon, but in order to be World Champions again, we have to keep on improving”.

“We’re very happy about the result of a very tough game, which could have gone for either side, in my opinion. I think we may have had more luck in the last eight minutes. Mayssa (Pessoa), who went in to the goal for the last minutes practically shut down the goal and I’m sure that also had effect on the result”, stressed Morten Soubak.

Brazil will clash against Argentina tomorrow at 16hs while Germany will face South Korea at 20:30hs in Sydbank Arena in Kolding.