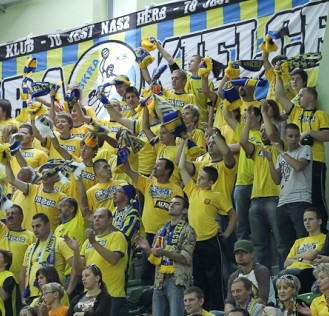 It was known that the match between Vive Targi Kielce and Chambéry Savoie was important for both teams – Kielce needed 1 point to win Group C; for Chambéry it was the last chance to fight for the fourth place. The game began well for the Polish champions but after 5 decent minutes they started losing too many goals; neither offence nor defence worked properly and in 16. minute French team was leading by 7 goals. Fortunately for Kielce, its players pulled together, started catching up with the opponent and eventually took the lead right before the half time. Also Venio Losert , who replaced Sławomir Szmal in hosts’ goal, made a difference and had a few good saves. The second half was not as thrilling and changeable as the first one: Vive gained 4 or 5-goal-advantage and managed to keep it to the very end. The final result was 36:32 for Kielce. The top scorers for the Polish team were Michał Jurecki and Mateusz Jachlewski (8). This victory means that Vive Kielce will remain in the first place of Group C regardless of the result of the last match against Gorenje Velenje.