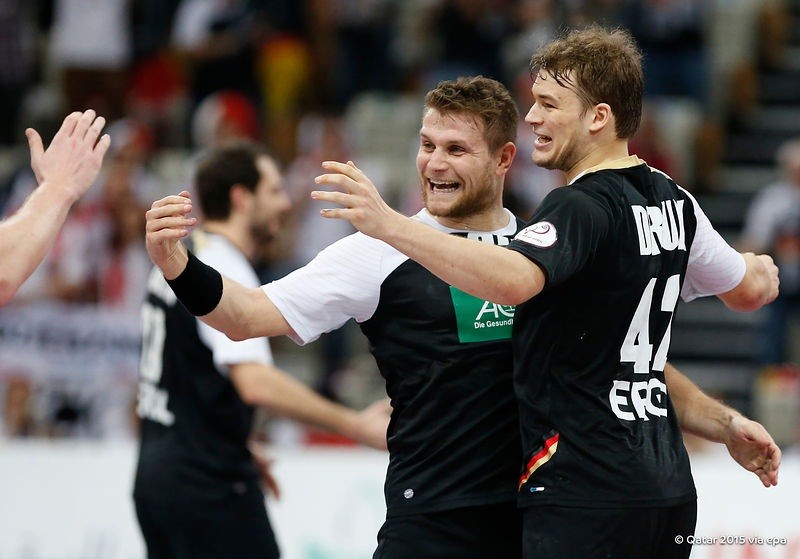 In the very first game of group D Russia beat Saudi Arabia 27:17. Saudi Arabia was able to keep up with Russia only at the beginning; Russian team struck and left their opponents behind leading 17:9 at the halftime. In the second half Russia kept their distance and in the end won 27:17.In the second match Germany defeated Poland 29:26. The game began quite tightly; the teams did not have the best time in defence but in attack they hardly failed. After 10 minutes Germany took 2-goal-lead and coach Biegler called for a time-out. When in 20. minute Pekeler was sent for 2 minutes on the bench, Poland managed to equalize at 10:10. However, the Polish joy was short-lasting as Germany got on the lead again. Poland stopped with 5 minutes to go and let their rivals left the court with 4-goal-lead (17:13).
Poland took the better start in the second half but even though Germans started making mistakes, they were unable to catch up. In 36. the situation of Poland seemed to be quite bad when both Grabarczyk and Rojewski ended up with 2-minute- suspensions almost in the same time and Germany played in a double powerplay. Surprisingly, mostly thanks to Wyszomirski in the goal, they reduced the gap by 1 goal during this period. Polish defence started working better than in the first half and Poland again managed to equalize (20:20, 42, minute) but the scenario was the same as before – Poland equalizes but Germany soon takes back the lead. The second half was much better for the goalkeepers – Carsten Lichtlein replaced Heinevetter and became one of the heroes of the German team; Wyszomirski also did much better than Szmal, he was able to save much more throws, including Gensheimer’s penalty throw. Polish hopes got up once again in 54. minute when Michał Jurecki scored for 25:25 but wasted chances in attack allowed Germany to get back. By the end of the game atmosphere on the court heated up when during one of Poland’s scoring attempts Gensheimer, upset about Michał Jurecki’s actions, jumped on him with pretension. The quarrel was soon brought under control but both were sent off for 2 minutes, together with Bartosz Jurecki. Germany maintained the lead until the end and won by 3 goals.Third game of the group D between Denmark and Argentina ended with quite a surprising result as Argentina stood up to the favourite and gained 1 point after the 24:24 draw.