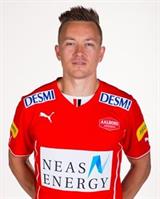 One of the best Scandinavian left wings, Havard Tvedten (35) has extended contract with the Danish best team – Aalborg Handbold. Danish team who playing in the EHF Champions League with a lot of success decided to keep one of the best players until 2016. Norwegian player has played in AaB Handball from 2002 to 2006 and then spent five good seasons in ASOBAL (BM Valladolid):

– Havard is in my opinion, the league’s best left wing, and with his experience and professionalism, he is a very valuable player for our team. His motivation and determination to win matches and titles are still top notch – says Jan Larsen from Aalborg Handball, writes hbold.dk.

Tvedten is a member of Norwegian squad from the Men’s EHF EURO 2014 in Denmark.