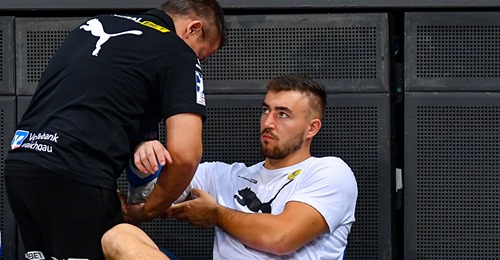 The Rhein-Neckar Löwen will have to do without line-player Jannik Kohlbacher for the next few weeks. National team player suffered a ligament injury in his right elbow in the final of the BGV Handball Cup last Sunday in the Stuttgart Porsche-Arena against HBW Balingen-Weilstetten (31:28).

“Unfortunately we have to worry about Kohlbacher.He noticed a brief blow on the arm and he heard something briefly. That is never a good sign. We have to investigate. His failure would of course be fatal because he is already one of the most important players. ” explained Martin Schwalb immediately after the game.

The list of injured and ailing players at the Rhein-Neckar Löwen has now been extended: Mikael Appelgren, Alexander Petersson, Albin Lagergren, Mait Patrail and Jesper Nielsen are not completely fit.

The new Bundesliga season starts on October 1st, but “the Lions” are challenged a week in advance. They will play their first leg in the second qualifying round for the group stage of the European League on September 22nd at the Danish first division club TTH Holstebro.