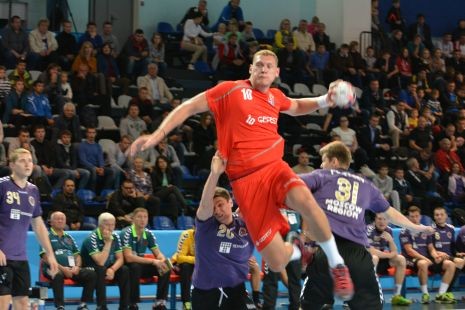 According the most popular handball media in South-Eastern Europe, Balkan-Handball.com, Latvian giant Dainis Kristopans is on the way to RK Vardar Skopje. The tallest handball player in Europe with 215 cm should replace Alex Dujshebaev, who signed deal with reigning EHF Champions League winners – Vive Tauron Kielce.

This means that 26-years old Latvian will join Macedonian champions in summer 2017.

Kristopans plays at HC Meshkov Brest since summer 2015. He made his name in European handball by playing at Slovakian Tatran Presov in period 2009-2015.

Another option on right back position in team coached by Raul Gonzales should be Spaniard Jorge Maqueda, who has valid contract until 2018.

Kiril Lazarov has valid contract with the Spanish champions until summer 2017, but obviously, the most successful team on the Earth will have to extend it or to find another solution.