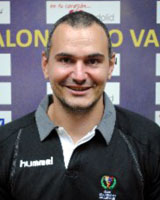 The Serbian Marko Krivokapic (37) decided that it’s time put end to his rich handball career. The final game of the ASOBAL between BM Valladolid and BM Atletico Madrid will be the final one of his career. He has had lately many injury worries, and now feels that his body “had enough”, and the 37-year old has opted for a retirement.

Marko Krivokapic won the Cup Winners Cup 2009 with Valladolid, when the team beat HSG Nordhorn in the two-legged duel on away goals.

On Saturday the home game against Atletico Madrid might prove vital for the clubs ASOBAL status for the next year. If the club loses and the other teams fighting relegation win or draw, BM Valladolid might find themself relegated.