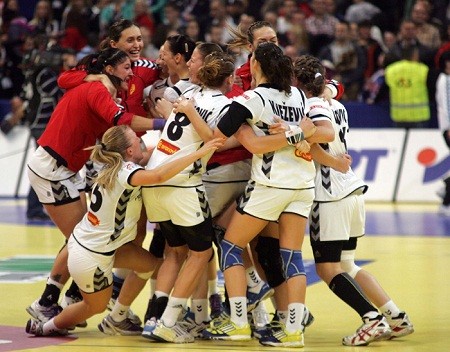 MONTENEGRO IS THE EUROPEAN CHAMPION!! MONTENEGRO WIN THE EHF EURO 2012 AGAINST NORWAY WITH 34:31 AFTER TWO OVER TIMES!! GOLD MEDAL FOR THE FIRST TIME IN THEIR HISTORY!

In a very tense match in which no team could make a goal difference larger than two goals in the first half, and in which both teams exchanged the lead in the first half, saw the Montenegrin girls leading 12:11 at half time after Barjaktarovic made some fantastic saves in the final minutes of the half. Sonja Barjaktarevic, Milena Knezevic and Katarina Bulatovic were Montenegro’s best in the first half, while Linn Jorum Sulland, Anja Edin and Yda Alstad along with goalkeeper Katrine Lunde Haraldsen are worthy of mention in the Norwegian team. Same followed in the second half, despite Montenegro having 3-goals lead at one point, Norway fought back and kept the tension in the game. So it went until the end, with 1 minute and 30 seconds to go it was 23:23! Knezevic scores for 24:23 with 30 seconds to go. Alstad scores for 24:24, and the game goes in over time! Despite having 3 goals lead in the over time, Norway fight back, and fight for another over time of 2 x 5 minutes! Not much changes after the third over time, 30:30 at the end of it. Finally with 3:0 run in the end of the 4th over time, Montenegro wins with 34:31 after 80 minutes of play!

Montenegro open the game with a save and a goal by Milena Knezevic, and in the next attack Norway equalizes to 1:1 through Yda Alstad, and the same player scores again in the next attack for 2:1 Norway lead. A real projectile by Katarina Bulatovic, and it’s 2:2. Another turn of the score, Knezevic and it’s 3:2 for Montenegro. The first two-goal is in the 7th minute, Pavicevic makes it 4:2 for Montenegro! Breivang makes it 3:4, and Riegelhuth has chance for 4:4 but misses a penalty, superb save Bajraktarovic. Miljanic from counter-attack and again two-goal difference, 5:3 in 10th minute! Heidi Loke’s first goal comes in the 11th minute, 4:5. Borgensen steals, and Herrem equalizes to 5:5. Bulatovic with her 2nd goal for 6:5 Montenegro lead, while Miljanic makes it 7:5 after Norway is given offensive foul. First exclusion is given to Suzana Lazovic, but Montenegro with the ball after Borgensen’s shot is saved by Barjaktarovic. Sulland hits the post, but in the next attack scores lobbing Montenegro’s goalkeeper, 6:7 in the 15th minute. Lunde Haraldsen saves, and Anja Edin with very powerful shot levels the score, 7:7. Bulatovic’s shot is saved, and Loke scores for 8:7 Norway lead. Dragan Adzic calls a timeout. Edin and Bulatovic score each, 9:8 for Norway in the 19th minute. Montenegro GK saves, Knezevic and it’s 9:9! Few minutes no goal deadlock is broken by Alstad and Norway leads again 10:9. Hergeirssons’ first time comes in the 24th minute after both teams fail to score in couple of attacks. Sulland‘s superb shot gives Norway two goals lead, only to be cut to one with Biljana Pavicevic’s goal. Norway is given 7m, but Barjaktarovic saves Loke’s penalty, 2 minutes suspension for Bulatovic Angjela. On the other side, Milena Knezevic manages to give Montenegro a penalty, and goal scored by Katarina Bulatovic, and the score is equal again, 11:11 with few minutes to go in the first half. Norway with offensive foul, and Milena Knezevic scores for 12:11 Montenegro lead! Montenegro defends well, and has the final attack in the first half, but score only after the half time was whistled. 12:11 Montenegro lead at the half time. In the first over time Norway can’t score, while Montenegro score two goals, and it’s 26:24 after the first over time.

Second half is opened with Angjela Bulatovic’s goal for 13:11 Montenegro lead, but Loke immediately scores for 12:13. Knezevic for 14:12 Montenegro lead, her 5th goal in the match. Radicevic with the counter-attack, and the first time 3-goal lead in the match, Montenegro 15:12. Only after Lazovic is given 2-minutes penalty, Riegelhuth scores for 13:15. Loke, and its 14:15. Jovanka Radicevic scores from 6meters, 16:14 for the Balkan country. A strange referee decision sees Norway scoring from 7meters, Anja Edin. Even with player less, Marija Jovanovic finds a way to score, 17:15 in the 40th minute. Bjorndalen‘s first goal for 16:17. Suzana Lazovic’s attempt results with 7-meters for Montenegro, and Bulatovic converts it in a goal, 18:16 Montenegro, only to see it down to one goal through Alstad. Same player scores again, and score is levelled, 18:18. Counter-attack for Norway and a Sulland goal for lead in the 45th minute, 19:18. Norway makes a 3:0 run. Radicevic from a very hard position scores for 19:19. Norway scores for 20:19. Barjaktarovic makes miracles with her saves, and finally Montenegro equalizes Knezevic’s 7-meters goal, 20:20. Two minutes suspension for Anja Edin. With player less, Riegelhuth scores for another Norway lead 21:20. Lazovic for 21:21 with 10 minutes to go. Linn Gosse from the wing scores, and 22:21 Norway lead it is. It’s timeout time for Montenegro.  Knezevic scores for 22:22 and in the next attack Andrea Klikovac is given two-minutes suspension in what seemed a questionable decision which kept Norway in the attack after a clear save was made by Barjaktarovic. Now it’s Hergeirsson‘s time for timeout. Riegelhuth‘s shot is saved by Barjaktarevic. Montenegro fail to score, and in what seemed an offensive foul resulted with Edin‘s goal for Norway lead 23:22, three minutes to go. Djokic‘s first goal, and 23:23. Sulland’s shot is saved, and Montenegro has opportunity to score with 1 minute and 30 seconds to go. Dragan Adzic calls for a timeout. Both teams fail to score in their attacks, and 1 minute to go sees Montenegro in the attack. Knezevic‘s bomb shot has Montenegro in the lead 24:23, with only 30 seconds to go. Norway calls a timeout. Alstad scores the equalizer, and Montenegro is given only 10 seconds to score a winner, but fails. Over time!

Over time is opened with Haraldsen‘s save. Breivang‘s shot goes over the goal. Jovanovic scores for first lead in the over time, under threat of passive attack. Loke misses, but Haraldsen saves again. Norway miss, and Knezevic scores for two-goal lead, Montenegro 26:24! Norway fails to score again, and after the first over time it’s great lead for Montenegro!

No team scores in their opening attacks, and the first goal is by Bulatovic for 29:28 Montenegro lead. Bjorndalen equalizes immediately. Radicevic’s goal for another Montenegro lead, followed by Barjaktarevic save, her 17th save! Norway gets a penalty in the final seconds and two-minute suspension for Marija Jovanovic. Alstad converts the penalty. Egal.

Camilla Herrem scores for Norway lead 31:30, but Knezevic returns the scoring, 31:31. Two minutes to go, Montenegro gets a penalty and Heidi Loke is suspended for two minutes. Katarina Bulatovic for 32:31 Montenegro lead! Angjela Bulatovic scores through a counter-attack for 33:31! Norway miss again, and it’s 34:31 for Montegro, through Jovanka Radicevic. Montenegro is the European Champion!