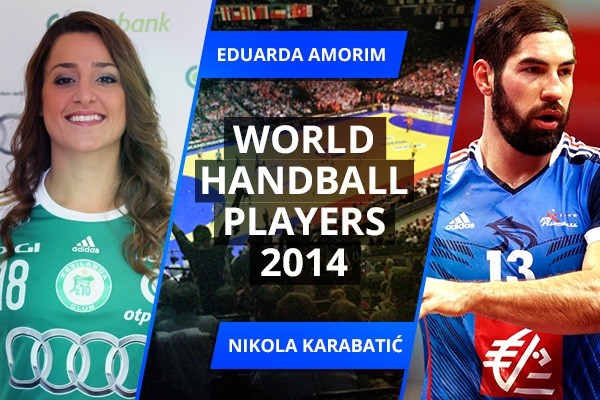 Nikola Karabatic (France – FC Barcelona) and Eduarda Amorim are the IHF World Best Player 2014 by voting over 55.000 fans all over the globe.

With  33.7 % of the votes, French superstar Nikola Karabatic is the clear winner of the award leaving the Danish ace Mikkel Hansen with 21% of the votes in second and his national team colleague and MVP from the World Championship in Qatar Thierry Omeyer in third with 19.5 % of the votes.

Karabatic’s award just approved the meaning of the fans and handball journalists who voted for him as the WORLD HANDBALL PLAYER 2014 in the traditional contest organized by Handball-Planet.com.

The winner in the women’s category Brazilian star from Hungarian Gyor, Eduarda Amorim, received  35.2 % of the votes leaving Christina Neagu from Romania in second with 25.8 % of the votes and Heide Loke in third with 16.8%.  Eduarda  is the second Brazilian to be crowned World Handball Player of the Year in three years, after Alexandra do Nascimento won this award in 2012. Eduarda,  a World Champion from Serbia 2013,  plays for Hungarian outfit Györi Audi ETO KC. She was instrumental in her side lifting EHF Champions League Trophy last year for the second time in a row.