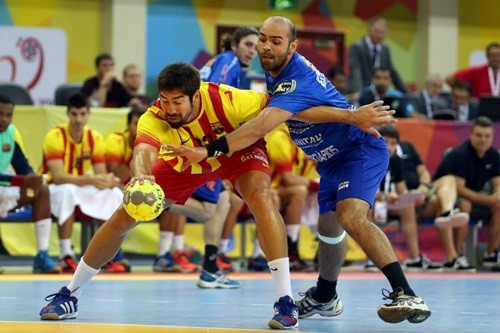 WORLD HANDBALL PLAYER 2014 is Nikola Karabatić. French star has got the highest number of votes from the journalists worldwide and the fans across the globe. One of the most successful members of the handball family in the present decade, with two Olympic and World’s gold with France, and two EHF Champions Leagu trophies in t-shirt of Montpellier and Kiel, now in Barcelona, already commented the award of Handball-Planet.com. Let’s hear what handball specialists said about his year 2014:

– Simply the best. To win the titles in Spain with Barca is not the most difficult task in the world, but reaching again the European championship with France was a really big thing. The only one defeat of Karabatic was losing the semifinal of Champions League, but nevertheless I can’t see any player who achieved more successess than the Frenchman – said Polish journalist from Przegladsportowy.pl, Wojciech Osinski.

His colleague, Patrick Andersson from Danish website Hbold.dk, had the same opinion:

– I have chosen Karabatic when he both national team and club wise has been a big factor. He was the French star at EURO 2014, and from the club point of view, he was one of the main players behind they came to Final4. For both, France and Barcelona, Karabatic has a major role on both ends of the court.

– The transfer to Barcelona re-animated the career of Nikola Karabatic enormously. He could leave behind all that had happened in France and can fully focus on handball again. The EHF EURO 2014 was the brilliant example of Nikola’s  leadership qualities. He was the key in the French team – and he took over the major responsibility in Barcelona’s All-Star Selection. So the only black stain on his 2014 year of success was not winning the Champions League.

Voice for Nikola came also from Slovenia, from Peter Zalokar (DELO), one of the most important handball journalists in the country of huge handball tradition:

– After some turbulent times Nikola Karabatić showed class both at Barcelona and French national team. He led Barcelona to CL Final 4, taking 3rd place, and he was best player for France at EHF Euro 2014 in Denmark, captaining his team to winning gold medal once again. He is versatile player with great shot and passing abilities. He also makes great effort in defence.

– He was the best player of European Championships in Denmark, both in defense and attack. He also led Barcelona to win everything in Spain and IHF Super Globe.