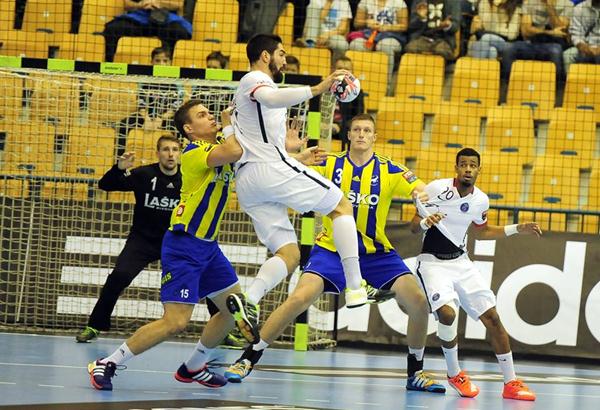 Nikola Karabatić (31) had two reasons to celebrate last night in Celje. He was, once again, match-winner for his team in a hot atmosphere of one of the most beautiful halls at VELUX EHF Champions League, Zlatorog Arena”, where 5.500 fans cheered for the success of his teams. The second was the trophy for the WORLD HANDBALL PLAYER 2014, which was given to him by the Handball-Planet.com editor Žika Bogdanović.

One of the greatest players ever in our sport spoke afterwards about many aspects of new era in Paris Saint Germain, especially, about his relation with Zvonimir Noka Serdarušić, who was one of the biggest reason for arrival in Paris last summer.

Did Noka changed a lot in his coaching philosophy since your winning seasons in Kiel?

– Of course, it is different system because we don’t have same profile of the players. We have to built our game on something we have in the roster, to improve our qualities. We can’t play as Kiel before, because now team’s profile isn’t same.

Is your role of “extended coaching hand on the court” even bigger than it was in Kiel?

– I had the same role in Kiel. I was listening Noka very carefully, I learned a lot and give another perspective to my game. I always carefully listen his suggestions. Now, my position is playmaker, so I have to find more tactical solutions to be successful. It is different than in Kiel, but our basic cooperation between coach and player is on the same level.

Noka was your “second father” in a years before, is that relation evolved in some direction?

– We respect eachother in every single moment. Our relation is the same off the court. I don’t see why should something change?

He was very expressive in the critics after the match in Istanbul against Besiktas Mogaz. You know him very well, do you think that other guys understood his words?

– Noka is that type of coach, always knows why he tells something. There is always a purpose behind his comments. He wanted to wake up the team because we didn’t play on the necessary level in most of the matches at the start of the season. Problem weren’t only results, while also attitude, level of aggressiveness. He wanted to kick our egos. Now, I can say that team’s reaction was positive.

How is your relation with Mikkel Hansen. People can’t stop wondering, who is “No.1”, who is the biggest star in the team?

– The biggest star is team. All the players, all of them are the biggest. Actually, we don’t have stars. Our team is the biggest one, we all want only to win. It doesn’t matter who will score, who will have more shoots…

The rest of Europe thinks different and calling you “Galacticos”…

– Yes, of course, because we have big names, same as Veszprem, Barca, Kiel, also Kielce, they have big names. There is no such a huge difference between these rosters. The only difference is, how, as you called us “stars”, playing for their teams – concluded Nikola Karabatić his interview for Handball-Planet.com.