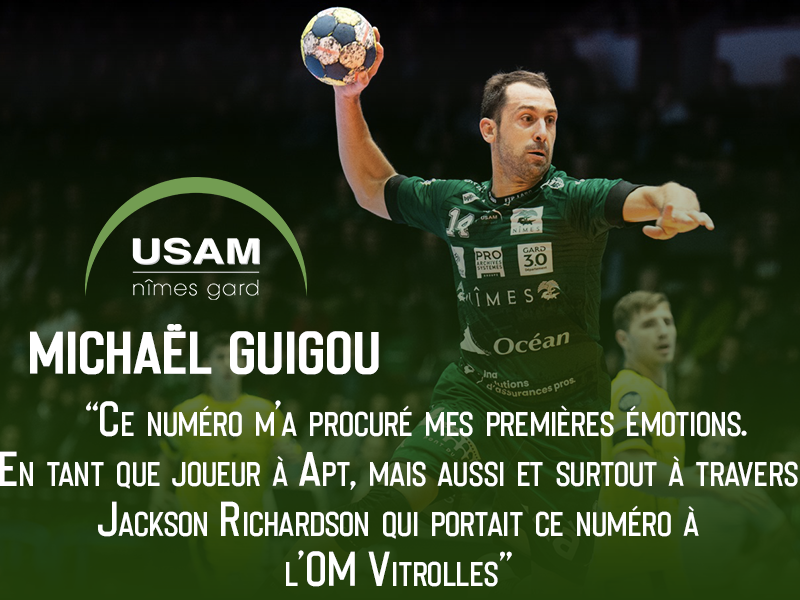 Share
Tweet
Share
Share
Email
Comments
Legendary French left wing Michael Guigou has decided to pay homage to his idol Jackson Richardson by wearing jersey No.18 as the first world class player from France wore it in Olympic Vitrolles, when Guigou began to play and love handball, USAM Nimes member, who changed his Montpellier Handball after 15 years of successes in summer 2019.
– Last year I had this desire to change my number when I arrived here, but I had not found a precise idea, nothing had convinced me. So I kept this number 14 by default, because it is the number with which I have always played as a professional.
But this year I found a number that matches me, that reminds me of the start of my career. In the end, it was a logical choice that was made. I chose to play with number 18! This number gave me my first emotions around handball. As a player at Apt, but also and especially through Jackson Richardson who wore this number at OM Vitrolles. Everyone knows him with his number 17 in the French team but at OM Vitrolles he had this number 18! For me it is at the same time a nod to him, the idol that he is for me. I had the chance to share matches with him under the jersey of the French team, it is a real honor for me.Then it shows even more my attachment to Provence, my native region. It also highlights Michel Cicut (my trainer in sports study in Marseille) or Eric Quintin. In short, it brings together a lot of things. But Richardson is someone who made me love and see handball in a different way, by its atypical and spectacular game, by its charisma and the freshness it had. It makes sense to me and I’m happy to wear this number in his honor – said French star who refresh his memories about handball start:
– My parents who played handball both had number 2. So when I started I took that number. And then I had 18 for a while, before switching to number 14 for my first professional contract. Don’t forget who your role models are. I watched Michael Jordan’s “The Last Dance” series. And it gave me inspiration. Everyone is as they are and it is important to learn from this. And Jackson is an incredible person, we cannot forget what he did for French handball and what he represented – concluded Guigou.