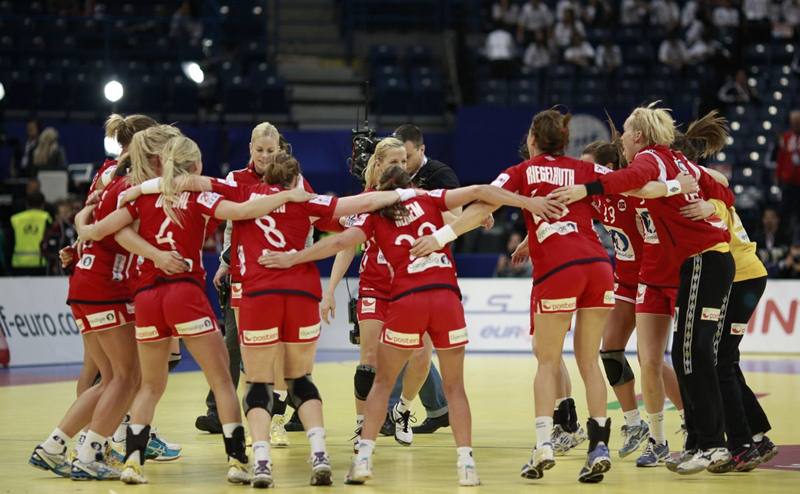 Norwegian handball girls are the best in Europe for the sixth time! Scandinavian team got back on the golden winning track after two Championship in Serbia, where they forced to prove domination of some other powehouses in the women’s handball. Norway beat Spain 28:25 (10:12) in the replay of EURO 2008 final and won the first gold since the Olympic tournament in London 2012.

The Spanish „Guerreras“ began match in their warlike style with two girls in TOP shooting form – Alexandrina Cabral and Nerea Pena. They scored all seven goals for Spain until the first time-out, called by Norwegian bench in 14th minute, when on scoreboard wrote – 7:3.

Spanish playmaker Nerea Pena continued to play in the same rhytm until the last five minutes of the first half, whe she scored her seventh goal for the maximal distance between two finalists – 10:5.

Thorrir Hergeirsson found the way to reset his players, who began to play significantly better in the last few minutes before the break. Silje Solberg, showed once again, why she was nominate for the best goalie at EURO 2014 with help of her team-mates in Scandi defense. Mork, Loke and Co decreased the distance before the half-time buzzer on two goals – 12:10.

After only five minutes of the second half, Spain lost advantage and let their rivals to take full control on the match. Despite Spanish girls were until the last minute of the final in the game, the only level has been seen in 43th minute, when Marta Mangue netted for 20:20.

It looked that four goals in a row for the Olympic champions could crush Spain (26:22), but they came back into the battle for the first gold ever with 3:0 series, which allowed them to attack for 26:26 twice in 55th minute.

Silje Solberg was outstanding in the crucial moments, same as amazing Linn Kristin Rigelhuth Koren, who scored 8 from her 10 goals (100%) in the second half. With Nora Mork (7), there were no someone in the Spanish team, who could compete with them in the decisive moments of the match.

Koren scored for 27:25 at the beginning of the 59th minute, when became obvious where the golden medals will travel tonight….