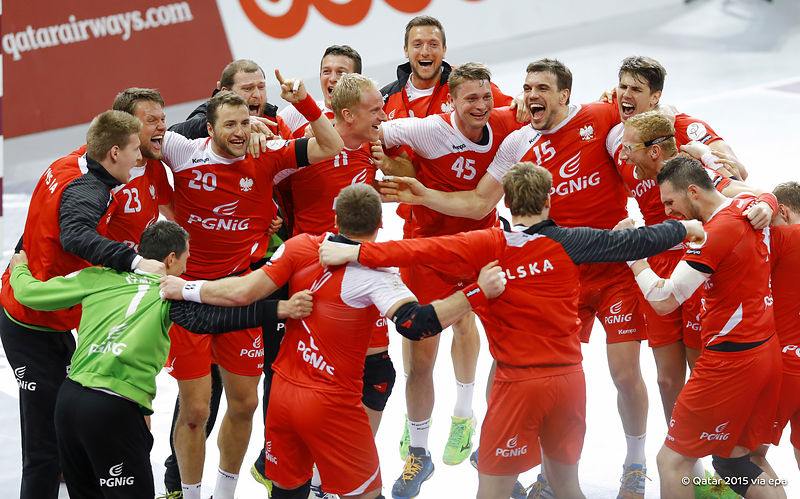 After thrilling 70 minutes, they took the 29:28 victory against Spain and won 3rd place match.
Both teams started the game with very good defences. Very few goals were being scored but they were scored mostly by Poles who succeeded in breaking through Spanish defence. In 6. minute the result was 3:0 for Poland and coach Cadenas asked for a time out. Spain didn’t score their first goal until 8. minute when Rocas stole the ball and made it a goal. However, Spaniards still had problems with their rivals’ defence plus Szmal in the goal and Poles reached 4-goal-lead. After a quarter Spain started coming from behind – Vargas denied Bielecki twice in a row and Garcia scored at 8:7. Poland managed to stay on the lead for a few minutes but their poorer performance in attack and Vargas’s saves gave Spain a chance to equalize at 11:11 in 23. minute. Poland kept 1-goal-edge but in the last minute Spain could get on the lead when Szyba missed the goal but they were unable to score before the half-time whistle.
What Spain couldn’t do in the first half, they did it right after the break – Aginagalde gave his team their first lead 14:13 in the 31. minute. Both Szmal and Vargas kept making up for their team mates’ mistakes in attack. In 41. minute Spain made use of 2-minute-suspension for Syprzak, and Tomás hit the net twice and his team got their first 2-goal-lead. In the next minutes all Poland’s attempts to score were unsuccessful – Spanish block was handling Bielecki’s throws, Vargas was at the ready and what is more, Poles helped their rivals themselves by misses or unused fastbreaks. So in 51. minute Spain led already by 4. But Poles put themselves together and began coming from behind. They used Spain’s unsuccessful attacks and with 4 minutes to go they had only one goal to catch up. However, an intervention of Macedonian delegate sent very well playing Szyba off for 2 minutes. One minute before the final whistle Rivera made the result 24:22 but Szyba responded immediately and the victory of Spain was still endangered. In the last attack Maqueda hit the bar and Poland had 20 seconds to equalize. The last chance throw was made by Szyba who equalized at 24:24 and thus saved his team two seconds before the end.The extra time result was opened by Poles who lost the ball first but then stole it and Daszek made it 25:24 for Poland. None of the teams managed to break the other one though and the first part ended with 26:26 draw. In the second part Szmal denied first Spanish attack; the game continued on a goal-for-goal basis but it was Poland who scored the last. Syprzak finished his very good performance with a goal at 29:28 with 30 seconds to go. Spain tried to equalize; they had two seconds to execute free throw but the ball stuck in Polish block.