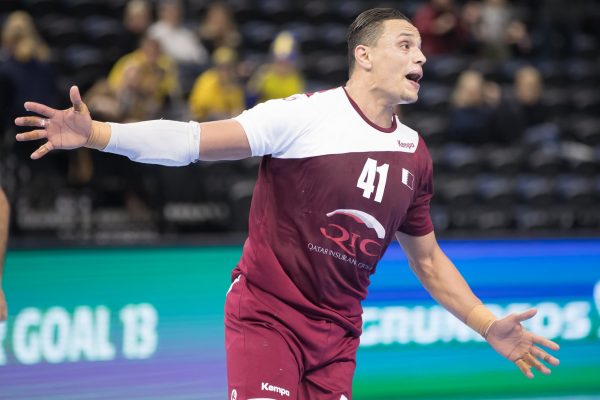 In the clash between the African runners-up and the Asian champions, . Qatar took the lead after 5 minutes (4-2), but a few saves from Karim Hendawy and a few adjustments in attack put Egypt in the position to catch up and eventually turn the score in their favor. 20 minutes into the match, the coached by David Davis were leading by 2 (8-10), however, consecutive goals by Youssef Ali, Allaedine Berrached and Rafael Capote put the Asians ahead 13-11 with 4 minutes left to be played.

A goal by Yahia Omar set the 13-12 for the Africans and on the following attack, Daniel Saric made his only save from the first half, denying a kempa from Ali Zeinelabedin, which could’ve been the ball that tied the match a minute before the buzzer. At the end of the first half, Qatar were leading 15-12, despite having struggled with 4 two minutes suspensions on this first period.

Looking at the beginning of the second period of the encounter, it seemed as if this would be a long match as the teams were 17-17 after 7 minutes, but then 6 unanswered goals from Qatar in the following 10 minutes pretty much closed the encounter (23-17 at 17’). The conducted by Valero Rivera showed their strength, an improved defense, and were able to maintain that goal gap.

Despite their best efforts to come back, with some very good moments from Mohamed Eltayar (46%, 7/13) under the posts and some scoring from Ahmed Elhamar (6 goals), and even though they counted with a rather numerous group of fans cheering from the stands, Egypt were unable to shorten the difference.

In the end, it was 28-23 for Qatar, who obtained their first two points in the competition, after a bad start with the defeat against Angola. Youssef Ali, who scored 9 times, was named best player of the match. The Asians will face Hungary tomorrow, while the African team will meet Argentina in a match that will be crucial for their chances to move to the main round.