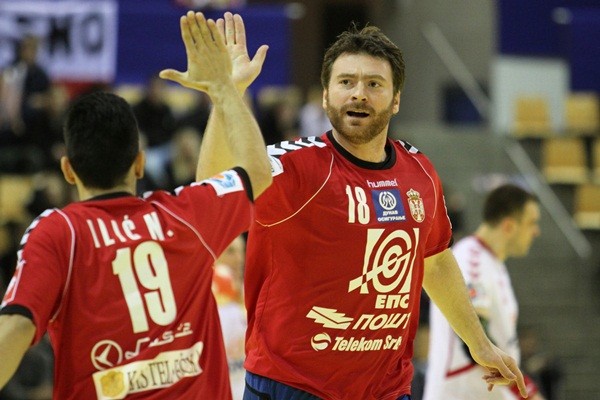 With players mostly from the domestic league (most notably, last year’s Velux Final4 participant Vive Targi Kielce) The Polish ‘White and Reds’ will mark the occasion of their 7th EHF Euro appearance with a match against a well-known rival Serbia, with whom they’ve traditionally lead a tight-contested battle, most recently at the World Championship in Spain. Serbian team came to the Euro after a turbulent period, in which no less than three coaches had governed the European vice-champion’s side. With the ‘Eagles’ finally settled with VladanMatić as the national coach, to embark upon defending the European vice-champion’s title.The ex-Celje tactician looked composed trying to instill his vast playing experience onto this rejuvenated team throughout the match.

It was Nikčević that took a flying start to the game, with the left wing goal, 50 seconds into the match.Good defense from Toskić allowed an otherwise defensive specialist Manojović to score a goal from the counter for 2-0.  Poland brought back into the match with goals from Jurkiewitz and Chrapkowski, before Nenadić took the score to 3:2 in favor of Serbia. It was goal for goal play, until the line-player Toskić scored his second of the match to extend Serbia’s lead to two.  Attempts from Vujin, Nikčević and Nenadić saved by the amazing Szmal, but it didn’t stop Serbia from scoring a 4-0 series to set score at 12-7, with three minutes to go in the first half.  The score stood at 13-9 for Serbia at half time, with late effort from Szyba to keep Serbia within Poland’s reach.

The second half started sloppy for the Serbian team with technical faults form Nenadić and Vujin, and turnovers from the experienced Ilić allowed Poland to level the score at 13-13 within four minutes into the second half. 2-minutes suspension for Manojlović caused yet another problem for Serbia as Jurkievitz set the score at 13-15 in favor of his team, just seven minutes from the start of the second half. Further endeavor from Poland to build on the newly gained lead, was stopped by the astonishing Stanić, who kept his goal consistently throughout the match, saving his team from potential problems. It was Zelenović’s effort into the mid-right followed by a thunderous drive by Rnić into the bottom-left that brought back the one-goal lead for the Serbian team. Stojković made it 18-16 from the 6-meter line, with 45 minutes into the match, prior to the 7-minute goalless period where both Stanić and Szmal excelled for their teams. It was Krajewski to open the score again in 52nd minute of the game, with Vujin set 20-18 from the penalty four minutes later.  Phenomenal Szmalkept the last-minute, 7-meter shot from Vujin providing a dramatic finish, with 20-19 for Serbia. Manojlović heroically kept Poland at bay, earning himself his second 2-minute suspension in the process. Despite the dramatic finish, the score line was intact in the dying moments, as the game ends 20-19 for Serbia.