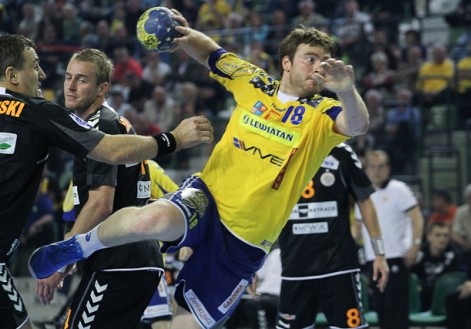 One of the “pioneer” of the new era of Polish club’s handball, Serbian line-player, Rastko Stojković (32) will leave Vive Targi Kielce after four seasons. It was 2009 when Stojkovic left German Bundesliga and HSG Nordhorn in direction Poland, what was unusual for that period. Just four years later, Vive Targi Kielce is one of the best European teams who signed contract with one of the best line-players, Julen Aguinagalde, which caused problem on the “line”, where Polish champion had four players.

Croatian player Zeljko Musa has renewed contract until 2016 just few months ago, so the decision had to be made between Rastko Stojkovic and Piotr Grabarczyk. After talks with both players, club’s owner Bertus Servaas has decided that Serbian player has to leave the team.

– Such moments are always difficult, because Rastko done a lot for our club. It was like a business conversation and parting in friendship and respect towards each other. Rastko always behaved like a pro. Unfortunately, this is a profession where you sometimes have to deal with this kind of situation – Bertus Servaas said for official club’s website.