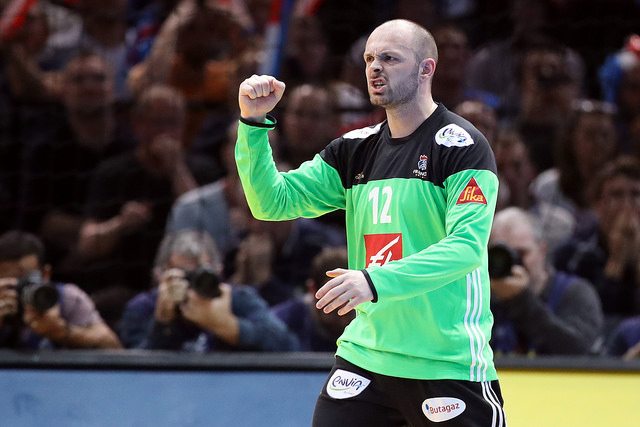 France are on the way to the Men’s EHF EURO 2018 final weekend. The world’s champions outplayed Sweden 23:17 (10:8), the only team who was on four points after Preliminary Round, which put Dinart’s boys on the first place of the Group in Zagreb. Hero of the night was French goalkeeper, the 32-years old Vincent Gerard with 19 saves, who helped his team to stay on the winning track before matches with Serbia and Croatia.

It was a moment of perfection when Vincent Gerrard saved 10th ball in 12th minute of the clash with Swedish team. Outstanding performance of Montpellierg goalkeeper, however, covered an average play of French back-line which scored only a goal in positional attack in the first 30 minutes. Kentin Mahe netted from 7-meter line (4:1) after 12 minutes.

It was a question of time, when Swedish backline and wings will start to find the way to the net of Gerrard. Until the end of first half, Jeppson and Ekberg kept Sweden on promising -2 (8:10) decreasing bad influence of Jim Gottfridsson who had 0/5 after first 30 minutes.

Lukas Nilsson balanced score for the first time in 41st minute (12:12), but strong French defense didn’t allowed any surprise. How important part of the game that was, describing the fact that Nikola Karabatic netted his first goal in 52nd minute, but even that wasn’t problem for his team to stay far ahead – 18:14.

France were on +6 five minutes before the final buzzer…