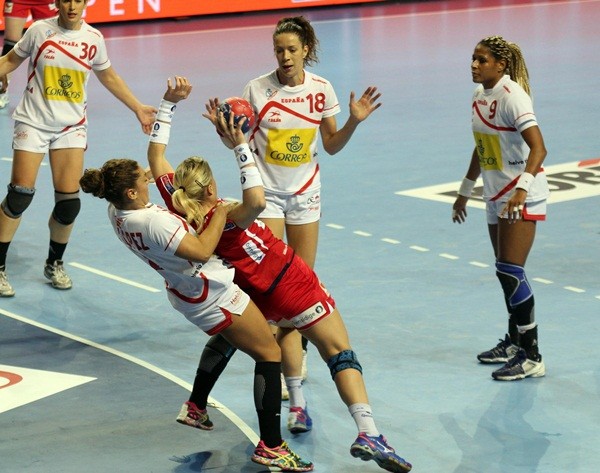 Spanish national team will play against Austria and Bulgaria in the second qualification phase for the Women’s EHF EURO 2016 in Sweden. The game against the Austrian team will be played in Spanish territory on the October 7th and four days later the European silver medalists will fly to Bulgaria to play their second match against the home team.

The Spanish coach Jorge Dueñas has just announced the national team’s roster for these two imminent matches. There are few differences from the last call: the most noticeable one is the absence of Macarena Aguilar (Siofok KC; HUN) who has just arrived in Hungary after a short stay in Russia. Besides, Marta López (Fleury Loiret HB; FRA) and Nely Carla Alberto (Union Mios Biganos-Bègles; FRA) are back in the team after a long period of absence due to injury. Meanwhile, the young but experienced pivot Ainhoa Hernández (Prosetecnisa Zuazo; SPA) is the main novelty of this list. So, these are the sixteen players called by Jorge Dueñas.

The Spanish international players will have training sessions in Santiago de Compostela from 4 October until match day against Austria. Two days after this duel they will fly to Bulgaria to play the second match of this qualification phase, on Sunday 11th.

The team conducted by Dueñas knows that World Championship in Denmark is just around the corner, and they take the importance of these qualification matches for the EURO 2016, not just to get tickets for Sweden, but to prepare as well as possible for the fight that will take place in Scandinavian soil in a few months.