The road to Qatar 2015 – Five continental qualifications ahead | Handball Planet 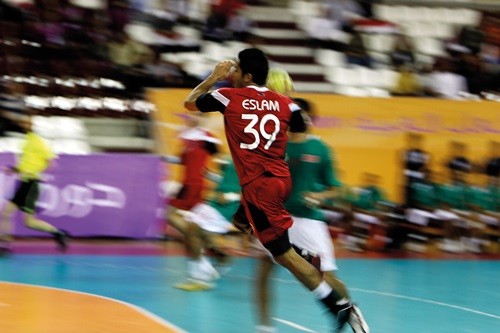 Besides the European Handball Federation, whose qualification procedure for the 24th Men’s Handball World Championships 2015 in Qatar was published in the end of June, all four remaining Continental Federations are in progress for their qualification stages to line up their national teams for the final tournament.

At the high-level event in Doha, that will take place from 11 to 27 January 2015, 24 teams will compete for the most prestigious trophy in the handball world. Of the 24 available spots, two are already taken: one by defending champion Spain and one by organiser Qatar.

The remaining 22 places are split up among the five Confederations. Eleven places go to nations of the European Handball Federation (EHF). They grant three direct spots to the top three teams at the European Championships 2014 in January in Denmark. Eight more places are to qualify for in a two-phased qualification tournament.

Four teams in Qatar will be from the African Handball Federation (CAHB). This includes their 3 regular places and one extra as a consequence of their good results at the 23rd Men’s Handball World Championships 2013 in Spain, where Tunisia finished on 11th place and gave their Confederation the best non-European result. The qualification will be played out at the 21th African Nations Cup from in Algiers.

Three places for Asia and Panamerica

Oceania with the last spot

The last place for Qatar 2015 goes to the Oceanian Handball Federation (OCHF) who are expected to organise their Confederational Play-Off games in April or May 2014.