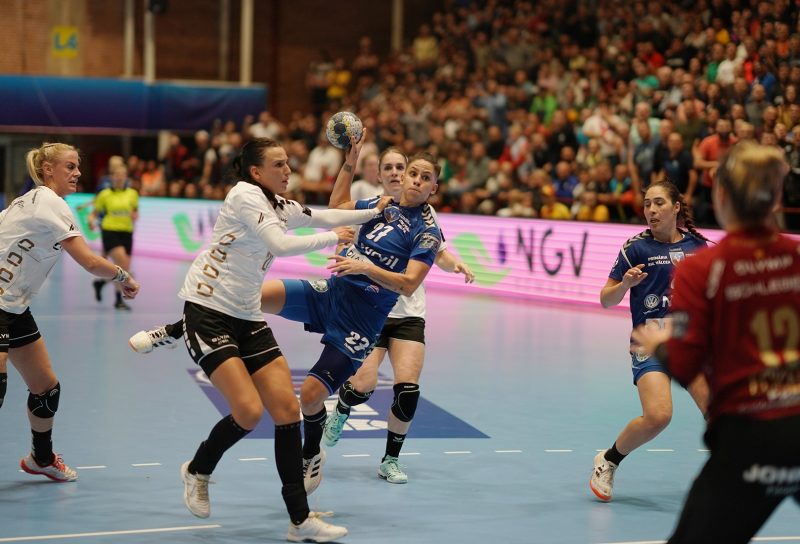 In the match that kicked-off the top European club competition, SCM Ramnicu Valcea defeated SG BBM Bietigheim 34-27 and are temporary leaders of group C, which also features 2015 champions Buducnost and Brest Bretagne Handball. Europe’s most prestigious tournament began yesterday with a thrilling match between the Romanian and German champions in Valcea, a city that was last present in the top tournament in 2013, when Oltchim Valcea made it to the semifinals.

The match began with a hectic rhythm and after the first 10 minutes the score was 7-5 in favor of the home team, who was showing a dynamic attack with Spanish Alicia Fernández in the command. On the other side, the goals were coming mostly from two of the Dutch players: Angela Malestein who was scoring from fast breaks and with little to no room from her right-wing position; and Laura Van Der Heijden, who would finish the match as top scorer with 8.

Bietigheim managed to put themselves ahead two times during the first half (13-14 at 22’ and 14-15 at 24’) but could not hold on to that advantage and finished 20-18 behind on a high scoring first half.

A tough defense and an effective attack helped Valcea stay ahead through the second period of the match. Goals were coming mainly from connections with both line players Iryna Glibko and Asma Elghaoui, and breakthroughs from Fernández, Vieira and Liscevic. After 15 minutes of the second half the Romanians were leading 28-23 and despite the efforts from the Germans, who narrowed the difference to 3 (29-26) with 10 minutes left to be played, four crucial saves from Marta Batinovic closed the goal for the final 34-27.

SCM Ramnicu Valcea will visit Brest Bretagne Handball next week while the conducted by Martin Albertsen will host Buducnost in Bietigheim. The Montenegrin side, which counts with the comebacks of top class wings Majda Mehmedovic and Jovanka Radicevic, will receive the French side in Podgorica this afternoon for the second match of group C.