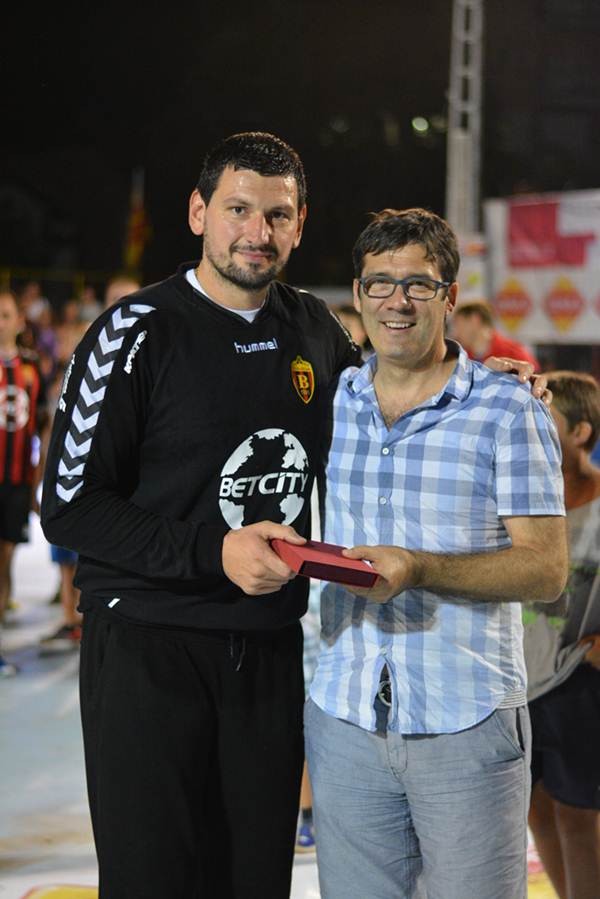 One man from Vardar has outshined all of the players from Macedonian national team on the pre-season tournament played in Struga couple of days ago. Even though there were several national players, Arpad Sterbik (35) has picked up the loudest aplause of Macedonian crowd. And that just shows how big and well respected he is. Former goalkeeper of Jugović, Veszprem, Ciudad Real and Barcelona has commited to Vardar for following four years, where he has joined the rest of handball stars in chasing the EHF Champions League trophy.

Having been asked has he ever imagined himself on Vardar’s goal, a team which was not very attractive destination in times when he was on the begining of career, he replied with following, „I have always been picking the right teams for me!“

„I have never made a wrong move. First Jugović, followed by Veszprem, Ciudad and finally Barcelona. I was always heading in other direction. This is the right move. This project is serious. From the first moment I arrived, I realized that everything is tip-top, both board and players. It’s getting better each year. I had an invitation from Vardar two years ago, which unfortunately I had to refuse. We have also talked last summer, that didn’t work out. Aftwerwards we have made a deal.

Vardar will have a new hall, meaning the you’ll probably have the best training conditions in Europe

Vardar has no worse conditions than other teams I’ve played in. Those requirements should be standard for every team worldwide. Good conditions are followed by good results.

So, you have arrived to Balkan, place of specific pressure and the highest possible expectations. You are expected to fight for medals in Cologne. What would satisfy your needs in the following season?

It’s hard to say. Every season is a story for itself. There are many great teams in EHF Champions League. It will be extremely hard to reach the Final four. Some teams that were really strong have become even stronger. Our goal is to step up year by year. We’ll try to return the title in Macedonian’s national league, and for EHF Champions League I’m hoping for convenient draw and luck with avoiding injuries. It’s a base for good result. There are several significant candidats for F4: Kiel, Veszprem, Barcelona, Kielce, PSG… those are very serious teams.

RAUL WAS A MORE THAN ASSISTENT TO TALANT

He wasn’t one of those assistents whose role is to warm the team and then sit on the bench. Raul has played with Talant in the national team, he was a middle back player and he has learnt much from Pastor. He’s really good at what he does and it’s no wonder he was handpicked by Talant for the job in Vardar. He was helping Talant a lot, especially concerning tactical part. He had a chance to join Talant in Kielce, but he decided to step up – to take the team and become a real coach.

In last sezone, your team mates were pointing out how satisfied they are with him…

His great work is not new to me. He was my coach for seven years. We have done similar things in Ciudad Real, more or less. It’s a different game style, different system, people need to be shown on video what and how it’s done. Every coach has his visions, so do coaches here on Balkans. He sees handball totally different from our coaches. We have good and smart players here, it doesn’t take much to figure out what he’s asking us to do. Little by little, we’re adopting new things. Every day is something new, so we’ll see when it will come to perfection.

WHY I DIDN’T GO TO BARCA SOONER?

For many years you have been running away from Barcelona, although the invitation was always open; and yet you haven’t stayed long there, only two years. Some thought that you were going to end your carreer in Barca?!

Whenever I was changing clubs I used to say that it can’t be better than it currently was. And I was mistaking, always. I have spent two wonderful years in Barcelona. When I arrived there, I kept wondering why I didn’t come earlier. It went fast, but that the way it is in life. When something is good, time goes by quickly. We haven’t won the Champions League, but we did win a lot of titles, we were on top of European handball and we were all more-less satisfied. It would had take a Champions league title to make it all perfect.

By the end of the last decade you were in Ciudad Real, the most powerful team of 21st century, with which you have won three European titles. How do you remember that time?

We had really good team, and when there are results, the atmosphere is good, life is good. Those few years were really fantastic. Our biggest oponent was Kiel, but it was a different way of competing, it was easier to play the Germans in two-games finals. It would be different if F4 is now in Spain or elsewhere. Now the German teams have the advantage of home crowd in Cologne. I think we got maximum from the Ciudad Real team.

Is Skopje your last station, considering you’ll be 39 when your contract expires?

I don’t know, we’ll see. When the time comes, I will make a decision based on the way I feel at that moment. I want to make the best out of this contract with Vardar, I want to give all I can to make it worth. We’ll talk about the future after that. Health is my priority, followed by motivation to play good and win titles. As long as it stays that way, I will be giving my best. One thing is certain, though, I will be in Skopje for the following four years.

THE BIG THREE BETTER THAN SPAIN

You have won the gold with Spain in 2013, but before and after that – no finals…

Is that little? There are better teams than us. Croatia, France and Denmark all have better team quality than Spain. We’re taking out maximum of our team, we’re among best four on each tournament. In London’s olympics we have lost to France by a single goal – scored in last second. We’re somewhere there, right next to the big three, that’s our spot.

Qatar is step one for following Olympics, that’s our goal. If we make it to the medals, that’s a great bonus.

What are your memories of times you played for Yugoslavia / Serbia and Montenegro?

Very nice. I’m in touch with all the guys from the team. We had a good time.

How do you explain the fact that no country ever has suffered from players loss as Serbia did, as it was case of you and your generation?

I have no idea. Some weren’t counted on, some went to places they felt more comfortable. I know for a fact that Eklemović and Miša Krivokapić left because nobody was counting on them.

I do. I’m friends with Ilić and Toskić, we chat about the national team a lot.

WHAT DO GERMANS AND SWEDES SAY?

Does Serbian disasted against Czechs bother you?

You can’t always be on top. Crisis must hit you from time to time. It’s very difficult to remain on high level. Serbia is a country of good handball, you have made appereances on last several competitions. Every country plays handball, so does Czech Republic. What are Germans and Swedes supposed to say after losing to Montenegro? Serbia dropped out by the Czech, but Germany and Sweden got dropped out by Montenegro, a country that was nowhere to be found in terms of world handball. Everybody plays handball, everybody wants to join the World Championship. Iceland got dropped out, Hungary got dropped out, Germany got dropped, but returned eventually… that is sport.

FROM „PERKE“ TO LANDIN
Who are, next to you, the best goalkeepers of your era?

I have always favored Perke (Dejan Perić), not only because I’ve learnt from him much, but because of the way he approaches sport, national team, teams he played… he was always positive, optimistic, a leader, giving energy. In hard times he was always giving his maximum to level up. But, there is one goalkeeper, Thierry Omeyer. He’s been best for ages now.

Omeyer is quite oposite to you…

Bigger goalkeepers are slower but cover more, smaller ones are quicker… but there are no advantages, really. Omeyer is the best for previous years. Now the era of Landin is coming. He’s a great talent, remarkable goalkeeper and he will be best in future, no doubt.

How do you see a figure of Sergej Samsonenko in sport?

There should be more of the kind in handball. Many go to basketball or football. There are very few people like owner of Kielce, former owner of Ciudad Real or Samsonenko – owner of Vardar. With 5 – 6 more people like these, handball would be on the basketball level.