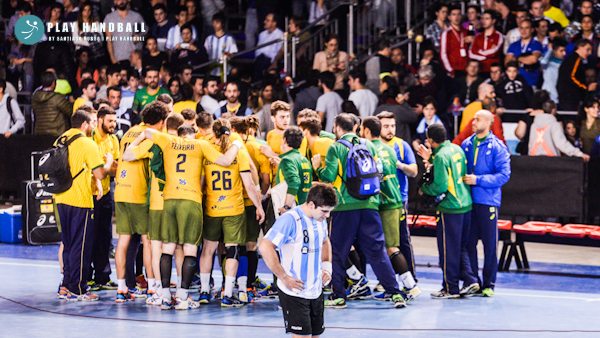 A new Pan American champion will be crowned this weekend since Argentina, the title holder, was knocked out in the semi-final by Brazil by 23-20. The conducted by Jordi Ribera obtained a victory that was built during the second half of the match and have secured a spot in France 2017. The Argentinian, which will be out of the fight for the gold medal for the first time in 20 years, will play for the last spot left for the World Championship and for the third place of the tournament in home soil.

The setting was perfect for a match of this scale. The stadium was full (5,000 people, sold out) and the crowd in Buenos Aires was eager for an Argentinian victory. Brazil reached the semi-final after 5 victories in the group round, while the local team had a more agonic classification.

The lead by Eduardo Gallardo had surprisingly lost against Greenland last Wednesday. And on the last match of the round an agonic win over Chile put them in the semi-final, but the team were almost out of the fight for the medals, and therefore out of the World Championship in France until a goal by Federico Pizarro in the dying seconds of the match and a desperate block by Federico Fernández (with an empty goal) brought them back to life.

But this was a new phase, this was a win-or-go-home game and the outcome of previous matches was now part of the past. It was as tough as expected. The goal difference was not bigger than two goals for the entire first half. Both teams made use of the seventh player rule, just like in previous matches; during which Fabio Chiuffa and then Federico Fernandez missed the target with an empty goal. The crowd played its part and helped the local team raise its spirit to turn the score around, but two bad ball handlings led to two fast breaks that Brazil changed for goals. By the end of the first 30 minutes, the score was 9-9.

Right after the beginning of the second half, centre-back Sebastian Simonet, who had scored two goals, left the court with an injury on his right shoulder. He wouldn’t come back for the rest of the match and it was his younger brother, Pablo, who took over the leading of the team. Brazil speeded up and took advantage of the two defensive changes that Argentina made on almost every play, but it was a couple of fast breaks that made the difference. The Albicelestes insisted on playing with the pivot, but the Brazilian defence was very awake and the passes would not reach their destination. With 10 minutes left to be played the score was 18-14. In the end, the difference was not too big, but the time left on the clock was not enough for the locals to overcome it.

For Jose Toledo, Wisla Plock’s right back, the match was decided due in the physical aspect: “I think the difference was there. They made two changes in the centre of the defence and we exploited it and speeded up when we needed to. We ran the entire time and I think eventually they got tired a little bit. The rotation of our players was also important; we made lots of changes depending on Argentina’s defensive set up”.

Fabio Chiuffa (BRA) and Federico Fernandez (ARG) were top scorers of the match with 5 goals each. Brazil’s rival for the final will be Chile while Argentina will face Uruguay for the third place and the last spot at stake for France 2017.