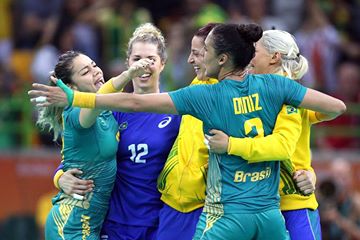 Brazil VS Romania 26:13 (14:9)! The host team of the Olympic Games in Rio took seriously the start of the tournament. Firstly they beat reigning world champions from Norway, and now the bronze medal team from the last WCh 2015 who has the best player on the Earth – Cristina Neagu!

The Romanian princess showed something of her genius, scored six goals, but that wasn’t enough against powerful home team, who once again had Anna Paula Belo in the main role with 8 goals. The Romanian team netted the last goal seven minutes before the final buzzer, which speaking a lot about confusion among the Balkan girls, who are now at the edge of early elimination from the tournament.

It will be “to be or not to be” match with Montenegro on Thursday.