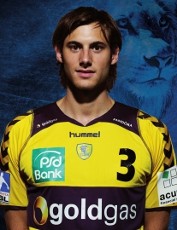 Germany’s biggest handball magazine (handballwoche) readers have chosen a German duo for the handball player of the year in male and female competition. Uwe Gensheimer, the Rhein-Neckar Lowen left wing who suffered an unlucky injury in November , have been chosen as the best in male competition, collecting 8622 points, making this his second “title” in a row, after being selected the best in 2011. Second came Filip Jicha (THW Kiel) and third was Silvio Heinevetter (Fuchse Berlin).

Katja Schülke (HC Leipzig) was chosen the best among female competitors, with the second place going to Laura Steinbach (Bayer), and the third to Clara Woltering (Buducnost).