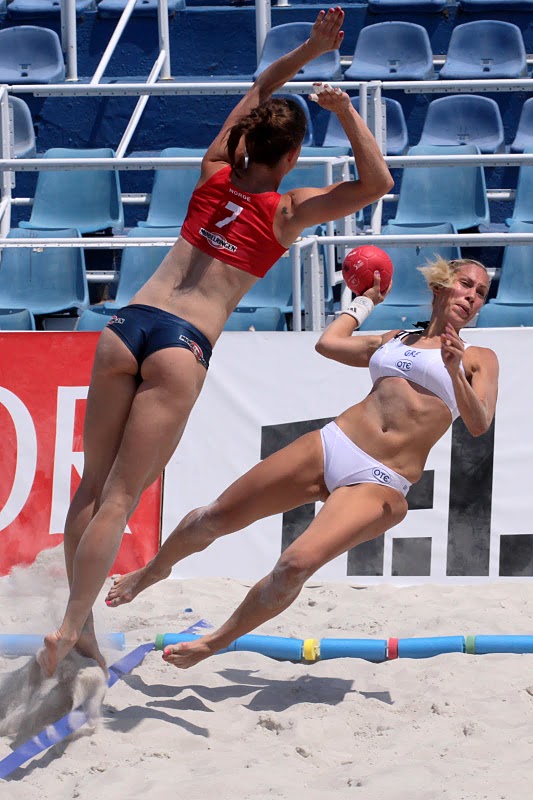 Hungary’s women’s 19 and men’s 19 teams proved to be unbeatable at the YAC European Beach Handball Championship as they both claimed gold at the event on Sunday night (7 July).

The nation’s women’s team laid the foundation for the double success, beating hosts Denmark 2:0 in the final. The men’s team then followed suit with a never threatened 2:0 victory against Turkey.

However, the women’s had to fight hard for the success against Denmark who were vocally supported by almost 1,000 spectators on the main court.

Hungary took the first half 25:19 and was constantly in the lead by four to six points until there were only two minutes left on the clock.

By then Denmark had caught up to 8:10, but Denmark’s specialist Christina Wildbork missed the chance to equalise, while Hungary scored with the following attack to make it 12:8 – and Denmark could not catch up once more.

The men’s final became a more clear cut affair with Hungary dominating Turkey at will.

They took the first half 21:6, and even though Turkey managed to play a more levelled match in the second half, they were behind 17:8 after five minutes and finally lost the second set 16:25.

In the women’s event the bronze medal match went down to the wire with Turkey beating Russia 2:1 after shoot-out.

Russia had taken the first set 13:11 with a golden goal, but Turkey fought back, led by their ever dangerous specialist, Sibel Karameke, who scored no less than 17 points and was Turkey’s key to the 21:16 victory in the second set.

Turkey’s goalkeeper then became the hero of the shoot-out as only Maria Belova managed to put the ball past her, while on the opposite side only one Turkish player failed, granting Turkey a 5:2 win in the shoot-out and therefore the bronze medal.

Denmark played strongly and had their asset in particular in Christian Mortensen who scored 16 points.

After Denmark had taken the first set 21:18, Russia tried to fight back but missed a big chance with only seconds to go, so that Denmark also won the second 21:20.

The overall placements for the men’s 19 event can be found here, the entire women’s 19 tournament here.
TEXT: EHF / ts