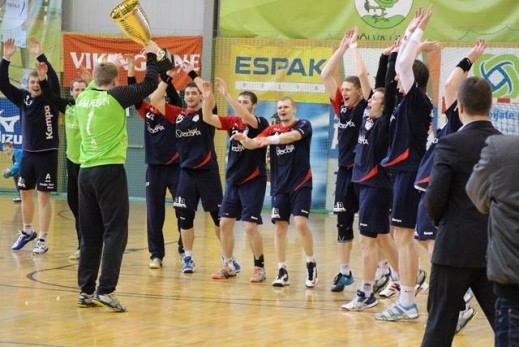 Defending BHL champions SKA started the match very powerfully and took a 4-0 lead, including star player Viktar Zaitsau scored twice from 7-metre point. Being 1-6 down, Serviti head coach Kalmer Musting was forced to take first time-out and the home team tried hard to get back into the game.

Belarussians responded with Serviti own usual weapon – aggressive defence, while both SKA’s goalkeepers were also in excellent form. In the 18th minute Serviti managed to cut the deficit to two goals (9-11), but SKA continued strongly. At the half-time whistle the scoreboard recorded SKA’s lead of 17-12.

Second half was much of the same, SKA dominated most of the game. After very few goals in the opening minutes, Serviti climbed back into the game and after Ardo Puna’s two beautiful goals the scoreline was 22-20. SKA goalkeeper Ivan Matskevitch made some outstanding saves and occasionally it seemed the Belarussian goal was locked and the key thrown away.

Last minutes did not change much and SKA cruised to a 31-26 win. Viktar Zaitsau and Aliaksandr Bachko scored 8 goals for the winners, while Puna was Serviti’s best scorer with 7 goals. The MVP prize for the best player of the final went to SKA’s Bachko and Serviti’s Puna was the top scorer of this season’s BHL with 117 goals.