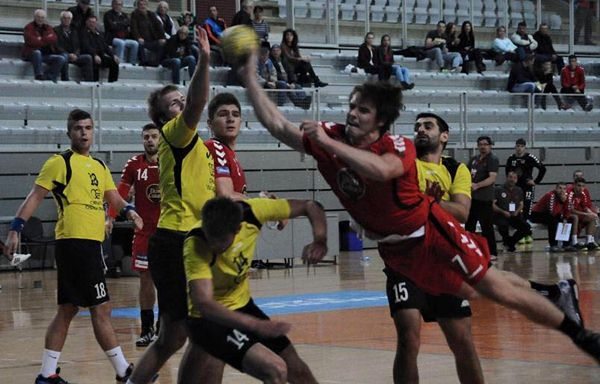 Handball school in the City of Bjelovar is among the most appreciated in Croatia. Former European club champion Partizan (season 1971./72.) existed in the town that developed a lot of talented handball youngsters as well. The 23-year-old left back Ivan Horvat is one of them. He managed to set the bar high by playing for GRK Varazdin in the last season of Croatian Premier League which led to a dream transfer to Flensburg. Just after joining Ljubo Vranjes and his new teammates on the north of Germany, Ivan spoke up about his career for Handball-Planet.com:

How did you start playing handball?

My father played handball. But I don’t think that’s the reason why I starterd it. I played football all the time. However, since Bjelovar is city where handball is ‘number one’ sport, coaches visited schools and invited kids to have a try on handball. I think trainings were Saturdays at 11. All of my friends decided to play handball except me and I don’t know why.

They did their best to bring me into handball, tried to ‘force it’. And I didn’t want to do it until once… I just told them to wait for me. Actually I was a goalkeeper at the beginning, but I never stood up between the post. Just did a warm-up as a goalkeeper. It didn’t take a while since I realized that I love scoring goals.

Have you expected that big transfer to happen this summer already?

No, I haven’t. But I hoped to play in some stronger league. However, transfer to Flensburg is not a ‘deal done’ situation to me. There is a lot to prove and achieve since I could say to myself that I succeeded. This is just an opportunity and it’s up to me to take the best out of it.

I don’t know, but am glad it is done in that way. I recieved a call from Vlado Stenzl after the Croatian Cup finals. He recommended me to Flensburg team and here I am. Have to thank a lot to Vlado Stenzl and Zdravko Guduras; they helped me a lot.

Does any of your handball role models play (or played) at Flensburg?

Negative, but I admire all of the players who played or still play at Flensburg.

You moved to Flensburg, Crnojevic moved to Kiel couple of days ago… What’s going on in Croatian Premier League?!

I don’t know what’s going on, but there is no doubt I am happy about it. I hope more players will move to superb handball clubs as that would be good for Croatian handball in general. Furthermore, my ex-teammates Leon Vucko (Tatran Presov op.a.) and Martin Marcec (Metalurg op.a.) moved to great clubs and I am sure they will do well over there.

What was the comment of your coach Vlado Vujovic on your decision to move to Germany?

He was pleased and congratulated to me. I guess he is also proud and impressed that his players move to such a big clubs and play as good as they can. It tells a lot about his qulity and the quality of GRK Varazdin as well. This team has been close to Croatian’ top clubs for three years. I would like to thank them and my coaches for everything!

Who is your biggest support when it comes to handball?

Without a doubt: my family, girlfriend and friends.

What are your biggest advantages in handball? How do you plan to impress German audience?

I really don’t know what are my advantages…

And last, but not least… Which men’s national teams are going to win the medal at the Olympics?

I just hope Croatia is going to win it haha. It doesn’t matter who else is going to take the metal – concluded the new member of top German club.