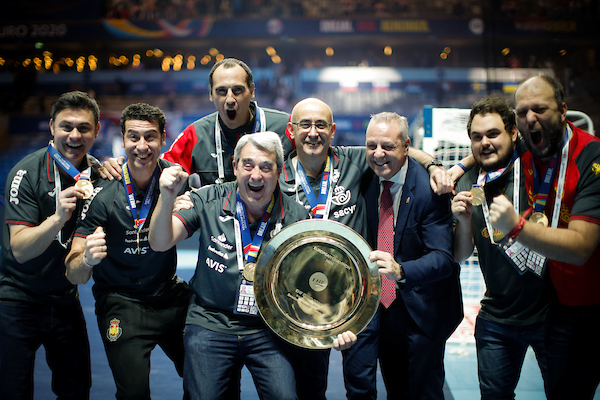 Jordi Ribera is again at the TOP of the European handball. The coach who got the first big chance in his career in 2016 by overtaking Spanish national team after era in South American handball, won EHF EURO with Spain for the second time in a row.

“The great success of this team is the environment that is lived, the group that has been created and that gives us an unusual force. One day I wanted to give them rest and they didn’t let me, which shows the implication that the team had for achieving the goal. It’s an extraordinary group and I’m very happy for them. The team is above all and that is what has led us to this success and betray him, even if it was the final. It was clear that Croatia was not going to let us go on the scoreboard. The most important thing was to reach the end of the match with that goal of advantage and not having to overcome us. In the end I think they have noticed more pressure in those final moments.

Lino Cervar after defeat in final: We missed Luka Cindric…

“The good thing about this team is that all the people who enter are very comfortable, know that they will participate in the game, know that they will participate in the game and that makes people leave with confidence because he knows that he will have his moment, he goes out without anxiety and that also helps, More than pressure to reach the tournament as champions, for us Olympic place was the biggest pressure. We didn’t want to go to the pre-Olympic and we knew that this was our first opportunity and we took advantage of it, achieving not only that desired Olympic ticket, but also qualifying for the World Cup and for the next European championship, said Jordi Ribera for Marca.es.